Dow Jones Industrial Average News, 3/15/2016: If it weren't for Bill Ackman's dismal stake in Valeant Pharmaceuticals International Inc. (NYSE: VRX), there wouldn't have been much new to talk about. As we've been saying since yesterday (Monday) morning, traders are largely in a holding pattern until the post-FOMC press conference in which U.S. Federal Reserve Chairwoman Janet Yellen will field questions about U.S. monetary policy. And while OPEC's failing oil production freeze and the insanity of central bank policy in Europe and Japan stayed fresh in our minds, it was Valeant's price-crushing earnings report and a different kind of "oil production freeze" that made us glad we didn't stop trading… 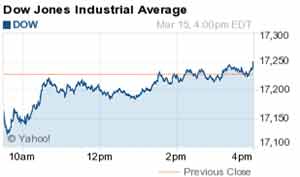 Although the markets have been chattering about OPEC's troubled oil production freeze, it was a completely different production freeze that ruled the day. The Obama administration said it will reverse its plans to allow new offshore oil production along the southeast coast of the United States. The announcement is a major disappointment to energy firms that were hoping to build on new reserves. The U.S. Interior Department says it will not auction drilling rights to the region after environmentalists, local residents, and the military opposed the plan. U.S. offshore energy production has not recovered to 2010 levels, back when the BP Plc. (NYSE ADR: BP) Deepwater Horizon oil spill paralyzed the coasts of the Gulf of Mexico.

Oil prices fell as warnings about a global supply glut again weighed on trader sentiment. Energy stocks slumped 0.6% on the day and were the third worst-performing major sector in the S&P 500. Shares of Chevron Corp. (NYSE: CVX) were flat, while BP Plc. (NYSE ADR: BP) stock was off 1%.

On the economic front, U.S. retail sales slipped again in February, and a significant downward revision to January data raises new concerns about growth expectations for the U.S. economy. However, investors are more interested in whether the Fed is planning on hiking interest rates after the FOMC meeting. CME FedWatch's figures indicate the markets don't anticipate a rate hike until later this summer. But here's proof that Big Banks around the globe are secretly rooting for another U.S. Federal Reserve interest rate hike this week.

The biggest talk of the day was about Valeant Pharmaceuticals International Inc. (NYSE: VRX), which saw shares crash by more than 51% to their lowest level since 2011. The company slashed its forward guidance for 2016 and warned of a possible default event, sending investors for the exits. The news is a crushing blow to activist investor Bill Ackman, who had doubled and tripled down on Valeant stock in recent months. If you listened to Money Morning Global Credit Strategist Michael Lewitt back in October, you'd have seen this earnings report and debt warning coming six months in advance.