The market-leading FANG stocks - Facebook Inc. (Nasdaq: FB), Amazon.com Inc. (Nasdaq: AMZN), Netflix Inc. (Nasdaq: NFLX), and the former Google, now Alphabet Inc. (Nasdaq: GOOG) - haven't had a great 2016, with returns in the neighborhood of -15% to just under 5% for the year.

Don't get me wrong - they're still good "holds" for investors wise enough to take the long view and accumulate big, steady gains over a period of years.

Those anemic gains aren't surprising, given that we're all but "officially" in the depths of a bear market.

But... like the old adage goes, "there's always a bull market somewhere," and I believe that's especially true of the basket of stocks I'm about to show you. As uncertainty and volatility rule the markets, these shares have already delivered bona fide breakout gains that most investors would kill for right now.

But you haven't missed out; there's a new technology just hitting its stride right now that could multiply these players' profits exponentially.

And the best part is they're all still available at real bargain prices.

They won't stay that way, though...

The Dow Jones Global Index (DJW), which represents some 95% of investable stock markets, peaked near 340 back in May 2015.

It recently fell below its 2007 high, a decidedly bearish sign. Look at the performance of the select FANG stocks against the market: 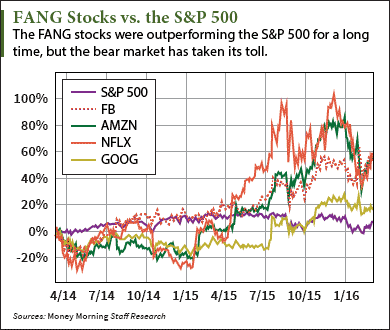 Meanwhile, one sector in particular has done the exact opposite, clocking breathtaking gains over the past three months.

But... gold has gained a blistering 20% from its low in the last 90 days, placing it in official bull market territory. In February alone gold captured its largest monthly gain in four years.

To call that a massive shift in investor sentiment is an understatement.

After a four-and-a-half-year bear market, my sense is that gold's bull mojo seems to be back. Gold could be headed for a multiple of its previous peak. After all, the bull market of the 1970s took gold 2,200% higher. So gold at $1,200 has still only attained a fraction of those gains.

This party is just getting started, and everyone is going to want to dance with these companies.

Some of the biggest profits will go to investors who grab these shares right now...

These Are the BANG Stocks

Just have a look at this chart.... 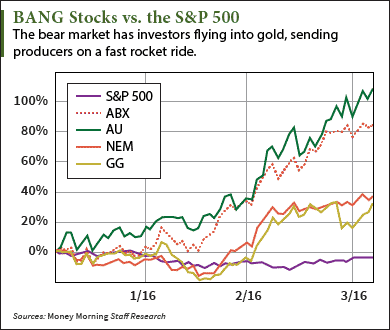 As the return of the gold bull looks more and more entrenched, gold producers just like this will be first in line to reap the biggest gains. They've already started.

As this secular bull gathers momentum, rising gold prices will attract an increasing number of participants. Precious metals are likely to culminate in a mania phase, with valuations reaching into the stratosphere.

As that unfolds, I expect the BANG stocks to become the new "market darlings," eventually surpassing the recent valuations of the FANG stocks.

Three drivers will get us there. First will be rising gold prices, of course. Then classic investor sentiment that gradually draws in more and more investors who fear being left behind.

But the third factor is a new, disruptive technology I introduced to you several months back. It promises massive profits on every ounce of extracted gold as overall production costs are reduced by an impressive 30% to 60%.

This is the most significant development in mining since the invention of the shovel...

The Dragon Could Unlock These Massive Valuations

As I explained back in October, Nippon Dragon Resources Inc. (CVE: NIP) has developed equipment called the "Dragon Extractor," a patented thermal fracking technology that will revolutionize modern gold mining. 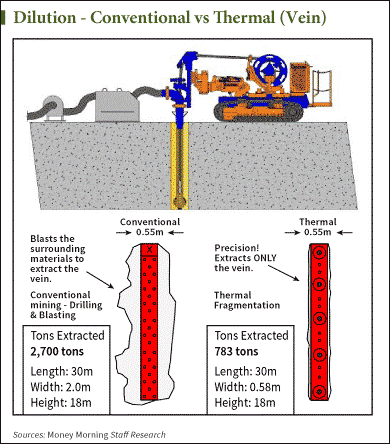 The company already has distribution agreements with partners in key markets in Canada, South Africa, Japan, Australia, and neighboring countries.

In fact, AngloGold Ashanti has recently indicated it's been testing an innovative "thermal spawning" technology that has demonstrated early success.

According to Martin Creamer in Engineering News, there are 1.1 billion gold ounces which "...stand to be left in the ground unless a new mining technology is introduced."

Creamer goes on to say, "The need for the new technology is compelling as only 60% of the gold ore in South Africa's rich Witwatersrand basin is accessible using current drill-and-blast technology, and 40% of the gold is left behind in pillars to keep seismicity at bay."

Nippon Dragon is the only company I know of exploiting this patented technology, and they've been targeting the mining industry to help miners access high-grade gold ore at much lower extraction costs, generating considerably higher profits over a drastically shortened time frame.

The BANG companies will be falling all over themselves to get at this machine and the immense boost it will give their bottom lines.

One really small Canadian company is the test case...

How These Companies Will Benefit

NIP will be performing thermal fragmentation operations at QMX's Lac Herbin mine, with work divided into several phases. The Dragon will initially help QMX mine its gold from a 600-mm-thick mineralized structure with minimal dilution, at what are likely to be highly favorable extraction costs.

Since I first told you about Nippon Dragon Resources, the share price has already gained over 200%. It's a great ancillary play on the renewed gold bull.

But we're still in the early stages of the introduction of their exclusive technology, and I expect it will contribute to exponentially higher profits for gold miners.

That could help propel today's largest gold producers to reach some of the largest market capitalization levels we've ever witnessed in any market, potentially reaching into the hundreds of billions.

When gold reaches $5,000 or more per ounce, the dragon extractor will help send most of that amount to the bottom line of gold producers, turning them into virtual profit machines.

Remember, a gold bull is about as exciting as markets can get.

The gold bull is back, and gold stocks of all kinds are going vertical right now. Michael Lewitt is recommending some of his favorite gold strategies, companies, and other investments to buy for protection and profit as the rest of the market tanks. In his latest investor briefing, he lists the miners he likes, along with gold ETFs and physical metal dealers, plus tips on when and how to buy gold. Click here to get it, and you'll get his Sure Money investor twice each week. There's never a charge for Money Morning Members.

Nippon Dragon is the real deal … a game changing technology.

Hate to be a downer, because I like theme, but Barrick? Really? Those people have long been in cahoots with the market manipulators … the price suppressors. A really unsavory outfit. I consider them criminals. I would NEVER own the shares.

How about the new FANGS. Franco Nevada, Agnico Eagle … okay, you can have Newmont (ho hum) … and Goldcorp. FN and AEM are big enough to qualify.

I enjoy these comments they have great content, i agree that commodities will rise.

I like Nippon Dragon and own some shares. Waiting for some upward momentum and will buy more. This stock reminds me of MagneGas (MNGA) that has revenues up 313% for Q3 2014 to 2015 yet the price barely moves. Maybe some day these will both soar.