Dow Jones Industrial Average News, 3/16/2016: Once again, pundits and financial media are wondering what the heck the U.S. Federal Reserve is doing aside from operating the U.S. economy from inside an academic fishbowl.

Fed Chairwoman Janet Yellen delivered a dovish and cautious statement during the post-FOMC meeting press conference today. During the statement and post-statement interview, she touted job growth (4.9% employment rate), spoke extensively about the "Phillips Curve," and later signed off with the message that the Federal Reserve is not considering negative interest rates as a policy decision.

We'll get into that and these other top market stories for Wednesday, March 16, 2016. First up, check out the results for the Dow Jones Industrial Average, S&P 500, and Nasdaq: 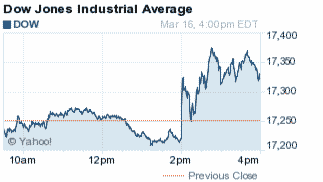 The Dow Jones slid 20 points ahead of the post-FOMC news conference but quickly reversed after the Fed left interest rates unchanged. The central bank's sentiment indicated the Fed only foresees two rate hikes this year (down from a previous expectation of four). The Fed raised concerns about global economic conditions and said it plans to monitor U.S. inflation levels closely. Sentiment on the latter comes after inflation increased more than expected in February. From stocks to bonds, from gold prices to currencies, here's what the Fed's decision means for your money.

Money Morning Chief Investment Strategist Keith Fitz-Gerald joined "Closing Bell" on CNBC after Yellen's conference to offer his insight on the Fed's actions now and up ahead.

"I think the international central banks are doing the dirty work for [Janet Yellen]," he said. "Japan made its move, China made its move, and Europe made its move with its bazooka. They are making it impossible for the Fed to raise interest rates." Keith said traders will continue to remain cautious until June.

On the economic front, housing starts increased by 5.2% in February to their highest levels in five months. Improving weather and general economic conditions fueled the rise in expected housing construction. That news pushed shares of D.R. Horton Inc. (NYSE: DHI) and Lennar Corp. (NYSE: LEN) higher on the day.

Global oil-producing nations have had enough game theory with Iranian energy leaders. OPEC and non-OPEC leaders said they will proceed with a meeting to discuss a global production freeze (with or without) Iran in April. Fifteen nations – representing 73% of global oil production – have agreed on the initiative, according to a statement from Qatari Energy Minister Mohammed bin Saleh Al Sada. Brent crude ticked up 4.1% to close at $40.33 on the day.

Meanwhile, WTI crude prices rallied more than 5.8% to $38.46 a barrel thanks to OPEC's plans and additional news that U.S. inventory levels grew last week at a smaller rate than expected. The U.S. Energy Information Administration announced the United States added 1.3 million barrels to its record inventory level of 523.2 million barrels.

Morgan Stanley (NYSE: MS) was cursed by some investors after the firm issued a series of stock downgrades. Shares of LinkedIn Corp. (NYSE: LNKD) fell nearly 5%, while Gap Inc. (NYSE: GPS) dipped 1.5% after the investment bank thumbed its nose at both companies. Meanwhile, shares of Fossil Group Inc. (Nasdaq: FOSL) fell 4.8% after it had its stock rating slashed by research firm Macquarie.

But here's the story that generated all the buzz today.

President Obama announced Merrick Garland as his selection to replace deceased conservative justice Antonin Scalia on the SCOTUS. Garland is considered a center-left candidate on the court and has a record that favors positions of gun control. Sen. Mitch McConnell (R-KY) quickly announced that Congress has no plans to hold a hearing in the near future. Here's a history of Supreme Court nominations, including the ones that never received confirmation.

Now, let's look at the day's biggest stock movers and your stock picks of the day…

Oil prices have suffered one of the worst crashes in modern history. But WTI prices have seen a strong rally recently, and there's one reason why they'll keep going higher in 2016 and beyond…