Yes, shares of natural gas companies are trading near their lowest level in seven years.

Last month, falling natural gas prices dragged the NYSE Natural Gas Index to its lowest level since March 2009. The index tracks 20 of the largest U.S. natural gas companies and is down more than 20% over the last six months.

But natural gas companies and their stocks are poised to see handsome gains in 2016 as natural gas prices rebound in 2016. And Money Morning Global Energy Strategist Dr. Kent Moors - a senior energy advisor to the highest levels of U.S., Russian, and Iraqi governments - sees one natural gas company providing the highest returns, especially after it made history last month by shipping America's first liquefied natural gas (LNG) export ever.

Before we get to that, here's why natural gas prices have tanked recently and why they'll rebound this year...

Why Natural Gas Prices Have Crashed Over the Last Year 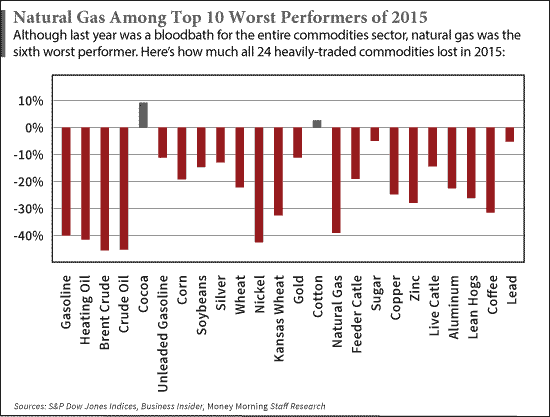 The biggest factor crushing both natural gas companies and prices has been soaring domestic supply. According to the U.S. Energy Information Administration (EIA), the United States produced 74.2 billion cubic feet of dry natural gas per day last year - up 5.2% from 70.5 billion a day in 2014. The agency expects dry gas production to increase again to 74.7 billion in 2016.

But the EIA also forecasts that consumption will outpace supply this year. Total consumption is expected to jump from 75.3 billion cubic feet a day in 2015 to 76.8 billion in 2016. This increasing demand will drastically reduce the excess supply and send natural gas prices on a long-term rebound.

And thanks to LNG exports, the United States will be largely responsible for meeting this demand.

You see, natural gas trading has always been localized because it's harder to transport overseas. But as a liquid, it can be loaded onto ships and transported anywhere in the world. That makes it a global commodity.

And out of all the natural gas companies set to benefit from the world's thirst for LNG, there's one that will be in a league of its own. That's because it was the first U.S. natural gas company to secure several multibillion-dollar export contracts with the largest LNG importers in the world. And it just began shipping LNG...

Many investors lost faith in Cheniere Energy Inc. (NYSEMKT: LNG) last year. Shares of the Houston-based firm cratered more than 49% as it delayed its export contracts due to low natural gas prices and slow operations at its processing terminals. Investors believed the company would never follow through on the contracts that sent its stock on a 255% rally between 2013 and 2015.

But LNG has been one of Moors' favorite natural gas companies for more than four years now.

And its long-term profitability was reinforced last month when it changed the U.S. natural gas industry forever...

"A number of American companies now have export licenses," Moors said in February. "But Cheniere is first and will be dominant for several years in setting the price."

The news demonstrates Cheniere's role as the leader of the monumental U.S. LNG industry. After all, Forbes forecasts the United States' excess natural gas supply will make it the third-largest LNG supplier in the world behind Qatar and Australia by 2020.

"The U.S. has moved into the global LNG export business and it is likely to become a major player in the sector well before the end of the decade," said Moors.

The Bottom Line: Natural gas companies have been beaten down by falling natural gas prices. Investors have sold their shares in a panicked frenzy as domestic gas supply continues to expand. But global consumption will outpace this sky-high supply thanks to the United States' massive role in the global LNG market. As a pioneer of the United States' emergence as a leading export player, we recommend investing in Cheniere in 2016.

Three Energy "Shifts" to Emerge from the Windsor Dungeons: Conversations at the annual Windsor energy consultations are always very frank. This year they led to agreement on the three most important changes currently reshaping the sector. And these three matters are about to open up some real doors to energy investment profits...

Thanks for the comments on LNG. Sounds like there's a trade there to make some money.