Dow Jones Industrial Average News, 3/17/2016: Another day, another glorious ride on the oil price roller coaster. Global oil-producing nations aren't worried about what Iran is thinking anymore. OPEC and non-OPEC leaders have said they will proceed with a meeting to discuss a global production freeze (with or without) Iran in April. Fifteen nations – representing 73% of global oil production – have agreed on to the initiative. With prices driving the markets in the wake of the U.S. Federal Reserve's conservative stance on interest rates, energy and materials stocks are why the Dow Jones rallied today. 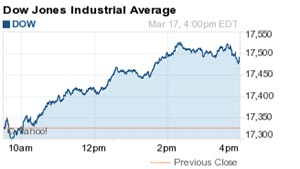 The Dow Jones Industrial Average surged 155 points as the markets largely ignored the incoherence coming from the Fed's post-conference meeting on Wednesday. The Dow finally turned positive for 2016, wiping out the 2,000-point drop that it experienced in the beginning of the quarter.

While the Federal Reserve decided yesterday to hold interest rates unchanged in the face of increasing global economic risks, mortgage rates surged for the third consecutive week. The 30-year mortgage rallied to 3.73%, while the average 15-year ticked up to 2.99%.

It was a brutal day for healthcare stocks. The iShares NASDAQ Biotechnology Index ETF (Nasdaq: IBB) fell 1.2% as the biotech sector continues to underperform. Shares of Eli Lilly and Co. (NYSE: LLY) fell 4.7% and were the biggest drag on the sector, while Endo International Plc. (Nasdaq: ENDP) cratered 11.4%. ENDP hit a three-year low after the firm slashed its first-quarter outlook below Wall Street expectations.

It isn't another day at the office without another rumor about potential mergers. This afternoon, shares of Office Depot Inc. (Nasdaq: ODP) jumped 10.8% after a report that suggested Amazon.com Inc. (Nasdaq: AMZN) could be looking to take a stake in the firm's corporate business division. AMZN stock fell 2.6% on the news.

On the economic front, it was a positive day for U.S. data. Weekly unemployment claims sat at 265,000 for the week ending March 12. It has now been 54 weeks that weekly claims have been below 300,000, which is the longest streak since 1973. Meanwhile, the Philadelphia Fed Index turned positive for the first time in seven months, a sign that U.S. manufacturing is improving.

But here's the story that generated all the buzz today. The U.S. dollar hit an eight-month low after the Federal Reserve decided to stand pat on monetary policy. The Bloomberg Dollar Spot Index, which tracks the greenback against a basket of 10 major competitors, fell 1.2%. The dollar fell 1.1% yesterday.

Now, let's look at the day's biggest stock movers and your stock pick of the day…