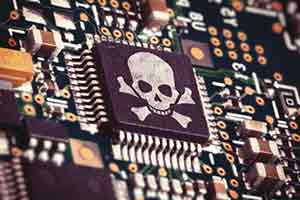 The new "Wild West" can be found right here, on your computer, mobile device, or wherever hackers can wield the Internet.

You see, the N.Y. Fed – hacked by cyber-criminals on Feb. 5 — had $101 million in Bangladesh Bank funds stolen from it by alleged Chinese hackers.

The stolen money was transferred to accounts in Sri Lanka and the Philippines. About $20 million sent to Sri Lanka has reportedly been recovered, but $81 million remains missing. Some of that money is thought to have been funneled through casinos, reported The Wall Street Journal on Tuesday.

"The Fed had the responsibility to keep the money safe," Shamim Ahamad, press minister at the Bangladesh Embassy in Washington, told VICE News on March 9. "We are suspecting that Chinese hackers have done it."

But there's a problem with Bangladeshi officials wagging their fingers at the Fed.

You see, this security breach happened well over a month ago. The Bangladesh central bank knew about it, but kept its mouth shut…

The day the heist took place, Feb. 5, was a Friday. The hackers had all the correct bank codes to move the money around when the first transaction went through. These codes followed precise protocol. They were even authenticated by the SWIFT code system, which is used for international transactions, reported Bloomberg Business on Monday.

So the N.Y. Fed allowed the transactions go through.

However, Fridays are the official start of the weekend in Bangladesh. The central bank's offices were closed.

The N.Y. Fed did not account for the closure, and by the time officials at Bangladesh Bank returned to work on Monday, Feb. 7, the requests moving the $100 million had gone through.

On Tuesday, Bangladeshi Finance Minister Abul Maal Abdul  Muhith said he would file a lawsuit against the Fed in an international court to recoup the lost money.

It could have been worse. The hackers had attempted to withdraw $850 million more, reported Bloomberg Business. It's not known when this massive request was made – just that it was made after the Feb. 5 transaction.

This particular request, however, was blocked after the Fed raised a money-laundering alert because one of the cyber-criminals had misspelled a name.

"Relying on poor spelling should not be a security policy," Andrey Dulkin, a senior director at CyberArk, a Jerusalem-based cybersecurity company, told Bloomberg Business. "If the Bangladesh Bank had been monitoring the activity of these accounts, it could've quickly identified the anomalous behavior and not have been completely reliant" on outside parties to raise the alert.

You see, the Bangladesh Bank knew about the missing money the day it reopened on Monday, Feb. 7. It didn't make a public announcement, however, until last Monday, March 7 – a full month after the hacking occurred.

Who do you think is the guiltiest party involved in this massive cybercrime – the N.Y. Fed, Bangladesh Bank, or – oh yeah – the alleged Chinese hackers? Tell us Twitter @moneymorning, or start a conversation on our Facebook page.