Anyone who's been watching the gold price can't complain for lack of excitement.

This week, we have mostly the Fed to thank for that. From not raising rates at the latest meeting to their indication of a slowing pace of rate hikes this year and the effects on the U.S. dollar, it's all been great for gold prices.

There are an increasing number of eyeballs focusing on the gold price, and that may be somewhat negative in the near term…

But if there's one macro indicator that helps determine the future path of gold prices, it's the one I'm going to talk about with you today.

We'll take a closer look at that in a minute. First, let's see just what the price of gold's been up to in the past week.

The Wild Ride of the Gold Price This Week 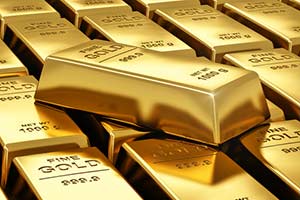 The gold price finished the last trading week on a weak note. It started NY trading at $1,265 and closed down at $1,250.

Tuesday saw little action as the market awaited news from the Fed. The gold price opened at $1,235 and moved basically sideways to close at $1,231.

Wednesday, however, was where the gold price action was mostly concentrated.

After opening at $1,231, gold barely moved until 2 p.m. As soon as the Fed's announcement of no rate hike and a deferred pace of raising rates was likely, gold exploded higher to $1,245 within minutes.

As the gold market kept digesting the news, gold pushed ever higher to finally close the day at $1,262.

So just what did the Fed do that gold loved so much?

Why the Fed Is Good for the Gold Price

My view is that it's not just the decision not to raise rates at this last meeting, but the combination of that with their outlook, that jolted gold.

And real interest rates are the macro indicator I mentioned earlier that can tell us a lot now about where gold is headed.

Projections from policymakers indicated two quarter-point increases were likely this year.  That's half of the expected increase forecast as recently as December. But Yellen cast doubt on the probability of even that pace.

Also interesting was the level of importance the Fed attached to the health of overseas markets and the global economy. That's something Yellen has tended to play down in the past. She said, "…you have seen a shift in most participants' path of policy. That largely reflects a somewhat slower projected path for global growth."

The effect on the U.S. dollar was unmistakable. It tanked.

Here's a look at the U.S. Dollar Index (DXY) over the past five days: 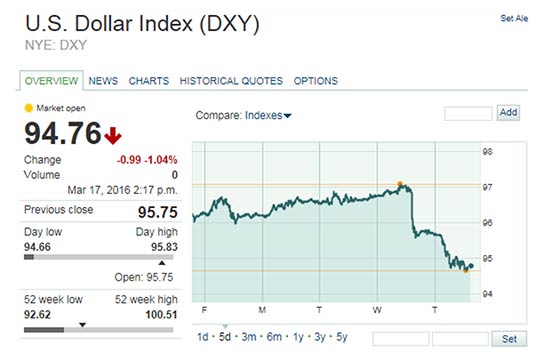 It dropped nearly 250 basis points over the next 24 hours, while the euro gained nearly 2.5% against the dollar.

The weaker dollar is a boon to U.S. multinationals with significant overseas revenue. They've been complaining for some time that the strong dollar's been hurting profits. And Yellen has just answered their calls.

So if there's no inflation to be found anywhere, to the great dismay of central bankers, how come gold, oil, and stocks are rising?

Why the Gold Price Is Up Now

I think the answer is a combination of negative real interest rates and perhaps an expectation of inflation.

A week earlier, the European Central Bank's Mario Draghi lowered interest rates, but he said the cycle of lowering rates was nearing its end.

Perhaps he sees the massive stimulus of the last several years starting to take effect and expects inflation to finally start rearing its head.

That would bolster the case even further for a rising gold price, removing even more of gold's opportunity cost.

Stay informed on what's going on with the gold price today and all days by following us on Twitter @moneymorning or liking us on Facebook.