But it's not at all clear investors should have greeted this news with so much enthusiasm.

The Oracle Corp. (NYSE: ORCL) earnings themselves were something of a mixed bag. The database giant earned $0.64 a share, beating estimates by $0.02. But revenue came in at $9.012 billion, below the Wall Street forecast for $9.125 billion and representing a 3% decline from the same quarter a year ago.

In addition to the bottom-line earnings beat and the Oracle stock buyback, investors also were pleased with the jump in cloud-based revenue - up 57% year over year.

But the Oracle stock buyback announcement, while not a total surprise, is beginning to verge on overkill. Take a look.

Oracle bought $10.283 billion worth of its stock last year. That's typical. Since 2012, the average annual Oracle stock buyback has been close to $10 billion. 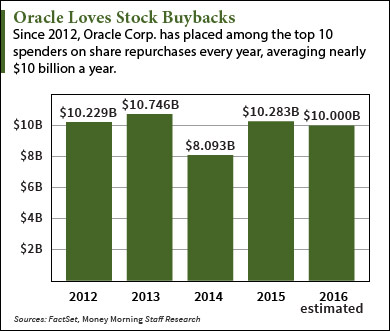 And while the Oracle stock buybacks have ramped up in recent years, the habit isn't new. Since 2004, Oracle has purchased $55.55 billion of its own stock.

And yes, that's high, even among large companies. According to FactSet, those billions of dollars' worth of Oracle stock buybacks have put the company in the top 10 each of the last four years. Another $10 billion this year will almost surely extend the streak to five.

Investors typically like stock buybacks because lowering the number of outstanding shares makes the remaining shares more valuable, boosting earnings per share. It's considered one way to return capital to shareholders (the other, of course, being an increase in the dividend).

And if a company is undervalued, a stock buyback can be a smart move.

But the latest ORCL stock buyback, coming as it does after years of excessive repurchases, feels more like a cheap move to bolster the Oracle stock price (which it did). If Oracle really wants to return money to the shareholders, why not beef up the dividend, which has an unimpressive yield of 1.55%?

While some may see Oracle's earnings and buyback news as a reason to buy ORCL stock, the company's history of large-scale stock repurchases actually masks some deeper issues that should make investors think twice.

Another Oracle Stock Buyback Is a Warning

To understand why investors need to be wary of more Oracle stock buybacks, it's necessary to understand what's going on with the company.

Oracle's legacy database software business has served as its cash cow for many years, but it has matured. And rivals like Microsoft Corp. (Nasdaq: MSFT) have adopted increasingly aggressive strategies to steal away market share.

In addition, the database business in general is transitioning to cloud-based solutions. For now, the cloud is a relatively new market with lots of room for growth. But it's also packed with large and hungry players, including Amazon.com (Nasdaq: AMZN) and Alphabet Inc. (Nasdaq: GOOGL, GOOG), as well as Microsoft Corp. (Nasdaq: MSFT).

That's why Oracle's revenue leveled off last year and was down year over year in its fiscal Q3.

It's also why Oracle is madly focused on expanding its own cloud business. In its earnings conference call this week the company bragged that revenue from all of its cloud businesses grew 40%.

That's impressive, but Oracle's cloud revenue is only 6% of total sales. The company's cloud business will have to maintain that pace or better to replace the slipping revenue from its eroding database business.

And yet earnings per share (EPS) rose, beating expectations and reassuring investors.

Here's where the years of Oracle stock buybacks ultimately serve as a kind of smokescreen for Oracle's underlying problems.

Why ORCL's "Good" Earnings Were an Illusion

While EPS beat expectations in Q3, net income declined 14%. And EPS, even with the help of years of massive Oracle stock buybacks, declined 12% from the same period a year ago.

The numbers get worse when you calculate them if the share purchases weren't made. ORCL's outstanding shares dropped by 200 million in 2015, thanks to the buybacks. Without that bit of manipulation, Oracle's Q3 EPS would have been $0.61 - a miss.

Let's go back to the share count in 2012, when the buybacks kicked into high gear. That was 600 million shares ago. Without the benefit of those Oracle stock buybacks, the company's Q3 EPS would have been $0.56 - a big miss.

Oracle knows its bread-and-butter database business has stagnated. And it knows it will take a long time for the cloud business to get big enough to replace it - if it ever does. So it has turned to massive stock buybacks.

"When managers see declining return on capital from operations, or when they see no worthwhile mergers or acquisitions to grow core business lines, they turn to buybacks. They can financially engineer higher earnings per share without boosting gross earnings or net income," said Money Morning Capital Wave Strategist Shah Gilani.

He believes stock buybacks are overused in today's market, even calling it a "con game."

It's not that Oracle is a bad company. It's still making money, and the cloud business is doing well. But overall the company is not thriving in the way management would like you to believe.

Right now Oracle is a company that faces serious challenges to its ability to grow revenue and profits. A better way to return cash to shareholders (and make ORCL stock a more compelling buy) would be to jack up its dividend.

Until Oracle can show that its cloud business can grow both revenue and profits, and not just tread water while its database business declines, investors should stay on the sidelines.

A Cloud Opportunity: As many of the biggest names in tech set their sights on the cloud, one thing is beyond doubt - this is going to be a huge market. Money Morning Defense & Tech Specialist Michael A. Robinson has been following this sector closely and likes one cloud winner in particular. He explains it all in the video below...