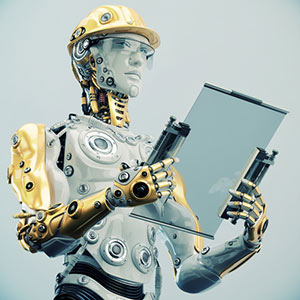 Resistance is futile. Robots taking jobs away from average Americans is going to happen.

And most Americans know it.

Take a cue from Andy Puzder, CEO of CKE Restaurants -- the parent company that owns Carl's Jr., Hardee's, and other notable food chains. The entrepreneur wants to open a "fully automated location" and hopes to one day swap out his 20,000 human workers for artificial ones.

"[Robots are] always polite, they always upsell, they never take a vacation," Puzder said in an interview with Business Insider last Tuesday. "They never show up late, there's never a slip-and-fall, or an age, sex, or race discrimination case."

Puzder is certain this kind of switch in employee demographic will happen relatively soon. He's not alone in this belief...

According to a survey published by Pew Research on March 10, 65% of all Americans expect artificial intelligence will do much of the work currently done by humans...

Pew specifically asked 2,001 working adults between June 10 and July 12, 2015, if they think that robots will replace humans as regular workers within the next 50 years.

The research firm broke down the public's answers into four "likelihood" categories:

Here's what it found: 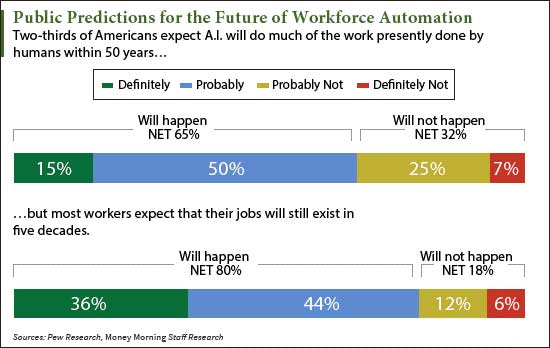 Interestingly, Pew's survey revealed that though many Americans expect that machines will take over a great deal of human employment, 80% expect their own jobs will remain largely unchanged.

So Pew delved into the 20% of Americans who suspect their jobs will change in the next five decades. This next chart reveals which demographic is the most skeptical among us about the great robot takeover...

What the research institute found was that workers in the government, education, and nonprofit sectors were among the most wary of AI. They think the change will "probably happen."

But 13% of large corporation and small/medium business workers were among the most convinced that automation replacement will happen. 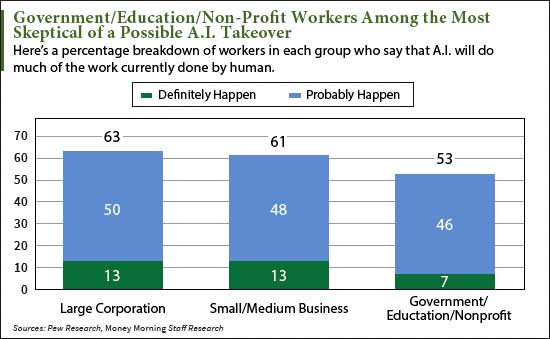