The City of London is hands-down the most important energy financing command center on Earth. More money for oil and gas projects is raised within a three-mile radius of Liverpool Street station than anywhere else in the world.

Naturally, this part of town is packed to the rafters with some of energy's most influential and important "money men" and women.

When I was at the Palace of Westminster for a closed-door energy briefing at the House of Lords, these financiers were absolutely electrified by one recent development.

It won't be long before these players are going to make a lot of money on this, and we'll have our chance, too...

Oil has been enjoying something of a breakout lately, despite dipping back below the $40 mark. New York benchmark West Texas Intermediate (WTI) remains up more than 12% so far this month, while London's benchmark Brent is up more than 8.6%.

Now, you might be wondering where this breakout is coming from, since oil supply hasn't changed much since December.

But that's not how markets work anymore. Today, perception is more important than reality.

And that perception is now changing - fast.

The Oil "Freeze" Deal Is Moving Ahead 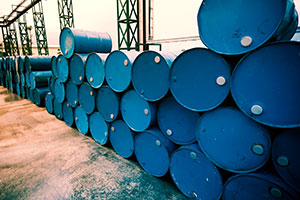 This month saw some of the most encouraging action of the past year, as both Dated Brent and WTI topped $40 a little over a week ago. These were the highest levels since early December 2015.

I attribute the jump to international efforts to cap oil production.

As we saw this month, OPEC in general - and Saudi Arabia in particular - needs to get Iran on board to have any genuine chance to cap oil production. And remember, the Saudi-led refusal to cut production back in November 2014 was cast as an OPEC decision meant to force producers outside the cartel to sacrifice market share.

With Russia now apparently prepared to agree to cap production, Saudi Arabia can portray the oil "freeze" deal as a move that involves more than just OPEC countries.

A meeting is set in Doha, Qatar, for April 17. The Saudis and Russians have signaled they will agree to a production freeze using January figures.

It now appears that Iran may agree - with a little help from OPEC...

An important thing to remember about this deal is that production is set to freeze at January 2016 levels.

Now, January was one of the heaviest months for oil extraction in years. So that means by agreeing to cap extractions at those (high) levels, producers really aren't giving anything away.

This is to be a production freeze, after all, not an actual cut.

And as you've seen here before, Iran is just emerging from a crippling brace of Western sanctions and obviously wants to secure a greater percentage of the global export pie to gain as much new revenue as possible.

Tehran has said that it would entertain a freeze only after essentially doubling its current exports. But then adding some 2 million additional barrels to a global market glut is hardly conducive to supporting prices.

That's where "petro-politics" comes in.

It's no secret that Sunni-majority Saudi Arabia and Shiite-majority Iran are adversaries. We see the two countries locked in proxy conflict it in Yemen and Bahrain, in the storm whirling around Assad in Syria, and in the ancient, bitter Sunni-Shiite religious division that underlies it all.

Despite all of this, both sides understand that crude oil is the lifeblood of their respective economies, OPEC, and the wider region. As a result, an accommodation is in place whereby Iran is effectively allowed to overproduce in return for Tehran providing cosmetic support for a "freeze."

Now, "pundits" with no real experience in the oil industry, who have likely never set foot in an actual oil field, will claim that a production cap won't have any effect at all, because supply will still be higher than demand.

Instead, some of them are saying that the cap "may be a precursor" to actual "cuts in global production."

Good luck with that one. They couldn't be more wrong...

There's No Cut... but the Cap Will Do the Trick

You see, there are zero indications among the major producers of any such intentions. That should come as no surprise, since one of the primary contributors to new international supply - American unconventional (shale and tight) oil - is not even at the table next month in Doha.

What's more, U.S. producers have now been given a Congressional green light to go ahead and begin oil exports after over four decades of being banned from doing so. It may take a while, but that new volume will be competing in some of the main markets already serviced by OPEC, Russia, and other players.

No, the production cap is working, and it's not because of some far-fetched notion that it will lead to a production cut.

After all, in a perception-driven market, prices are not set by how much oil is traded, but by how that oil is traded...

As you've seen here before, the trading of oil futures contracts and shorts (especially when the presumption was that the price would continue to drift downward) provided an "artificial" stimulus to declining prices.

Here's how I see the real picture.

At the end of each trading week, I use an algorithm I designed to estimate the price impact of this distortion. As of last Thursday, the effective market prices for crude (as viewed by the actual end user of oil) are slightly less than $6 higher in New York (WTI) and $7 higher in London (Dated Brent).

So, that gives us an effective market price of around $45 a barrel for WTI and of $47 for Brent.

Given that my estimates remain at $45 a barrel for WTI and $50 a barrel for Brent by June, we are about there already. Even with the best of assumptions, we are hardly looking at prices moving to $60 a barrel or beyond anytime soon.

This is borne out by the recent declines we've seen in crude over the past few days. It's consolidating and indeed, most of the increases we saw in March were simply investors covering their shorts.

This is also how the production "freeze," even at the near-record production levels in January, is stabilizing oil prices.

The Cap Is Changing Trader Expectations

You see, those who trade in the actual commodity (the "wet" barrels) rather than the futures contracts (the "paper" barrels) set their prices based on expected supply.

But in the current climate, where the amount of supply coming into the market was expected to be increasing as producers fought each other for declining revenue, the opposite takes place. Over the past year, the assumption has been to set price based on the cost of the least expensive next available barrel.

The competition among exporters provided a way for traders to shave points from a contract and increase their profit margins.

A cap on production puts a ceiling on what traders can expect moving forward and discourages pricing based on the least expensive next available barrel.

This will allow for some stability in the price of oil moving forward. And that's good news for regular investors and oil kingpins alike, and it's exactly what animated the London crowd in my recent meetings.

Of course, demand is increasing and forward capital expenditures for expensive deep drilling projects in the United States and offshore have been dramatically reduced. This will lead to higher oil prices in the long run.

But at least short term, it will be the perception of traders, rather than the reality of the oil supply, that will support a restrained price breakout.

Now, here's a simple plan for you to beat Wall Street at the "energy game." Kent has just released a step-by-step guide showing how individual investors can go toe-to-toe with the Street's biggest and come out on top. Start reaping the energy profits - and get all of Kent's Oil & Energy Investor research at no charge. Just click here.

The law of the market will always prevail. Conversion to so-called " green " energy would cost more than to continue with oil. The only thing that should be considered, is to create efficient anti-pollution devices to make sure that we start considering lowering GHG.

There are reports that producers are already cheating by at least 100,000 b/d and that Iran is ramping up production to an additional 500,000 b/d. Meanwhile US stocks just hit an all time high, even with refineries operating at 90% capacity, no doubt to export more refined products. That does not sound like the price is going up any more, but more like down.