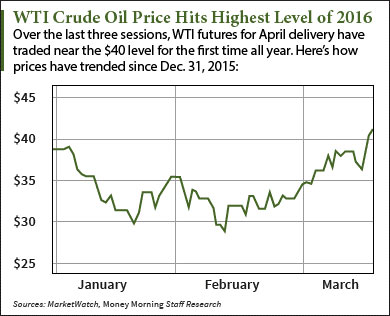 The Brent crude oil price also ticked higher this morning. The global benchmark – priced in London – jumped 0.6% to $41.44 a barrel. Futures for May delivery have gained 13.3% this month and 5.2% this year.

Why the WTI Crude Oil Price Broke Above $40 Today

The factor boosting the WTI crude oil price today is the bullish sentiment toward next month's OPEC and non-OPEC meeting.

The meeting is set for April 17 and will feature more than a dozen OPEC and non-OPEC countries. The nations, which include Saudi Arabia and Russia, will try to agree on a collective output to stabilize prices and alleviate each country's oil-reliant economies.

That's because many OPEC countries are in economic turmoil. As prices fell nearly 40% last year, Venezuela's economy shrank 5% and total revenue declined 70%. Even Saudi Arabia – the world's largest oil exporter and de facto OPEC leader – saw its government debt more than double from 4% of its total GDP to 9.4%.

"Even Saudi Arabia is cutting spending and increasing taxes," said Money Morning Global Energy Strategist Dr. Kent Moors – a 40-year veteran of the oil industry and top advisor to U.S. and Russian energy agencies – on March 17. "Some OPEC economies – Venezuela, Libya, and Nigeria being the worst – are either careening headlong into crisis or are already basket cases."

The meeting is so important that it has lifted oil prices despite today's expiration of the April futures contract.

You see, when futures contracts expire, oil traders usually "book-square" – the process of hedging contracts to reduce exposure to volatile oil prices. Investors do this when they're unsure of how the following month's contracts will perform, which often drags prices lower.

Typically, these expiring contracts would send the WTI crude oil price lower. But the upcoming meeting has renewed investors' hopes that oil prices will continue climbing in the long term.

And the most intriguing part about the meeting is that one OPEC country refuses to take part in next month's summit.

And according to Moors, this country now singlehandedly controls the future of oil prices…

How This OPEC Nation Will Affect the WTI Crude Oil Price

Iran refuses to take part in any production freeze until it reaches a daily output of 4 million barrels.

Since the start of the year, Iranian officials have ignored pleas from cartel members to keep output steady. You see, Iran is quickly ramping up operations because it wants to make up for 10 years of export sanctions. In fact, it already exported 1.75 million barrels per day from Jan. 21 to Feb. 19 and hopes to soon boost daily exports by another 500,000 barrels.

Investors worry Iran's resistance to the cause will drag the WTI crude oil price lower this year. With the third-largest amount of oil reserves in OPEC – roughly 157.5 billion barrels – the country has the potential to flood the already flooded market with more supply.

But Moors says Iran's progress in rebuilding export operations is overrated. That's because the country's infrastructure is in poor condition. Pipelines rupture on a daily basis and refined petrochemical products are simply exploding.

Without technology and funding from the West, Iran's oil industry will remain a dilapidated joke. This will force the cartel to give Iran time to get it together and let them export at maximum capacity – for now.

"OPEC (read: Saudi Arabia, which calls the shots) will give Iran a modified pass here, granting it some exceptions to the general production deal, and Tehran will show up at the negotiating table sometime in April, just like everyone else," Moors said last week.

"That should help oil prices stabilize, and is yet another reason to conclude that the bottom in oil was hit earlier this year, when WTI closed at $26.55 a barrel."

The Bottom Line: The WTI crude oil price is on an incredible winning streak. Futures have gained nearly 19% and show no signs of stopping over the long term. Despite Iran's reluctance to join the OPEC and non-OPEC initiative to freeze production, next month's meeting of the world's top producers will still show traders that no more excess supply will be brought to the market. This will inevitably stabilize and increase crude oil prices in 2016.

Stay tuned to Money Morning for more of Moors' energy recommendations by following us on Facebook and Twitter.