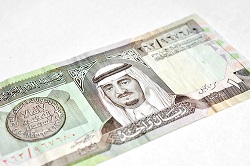 There's a Saudi Arabia debt crisis brewing, and the Kingdom is desperately trying to fix it.

Saudi Arabia ran a massive $98 billion budget deficit in 2015, and it's expected to grow. The International Monetary Fund (IMF) predicts the country will be broke in five years if oil prices don't improve.

Now the world's largest oil exporter has agreed to meet with over a dozen other OPEC and non-OPEC members on April 17. They will hopefully agree to freeze output in order to boost oil prices and ease each country's economic problems.

This shows just how desperate the Saudi Arabia debt crisis has become...

The country has always refused to work with other exporters. Throughout 2015, the country ignored the 44% drop in oil futures and maintained high production. The nation thought this would help it keep its big share of the global oil market. As of February, the Saudis produce roughly 10% of the world's oil supply every day.

But that strategy has backfired tremendously. And the Saudi Arabia debt situation has reached historic levels.

These two charts show exactly how bad the problem is now... 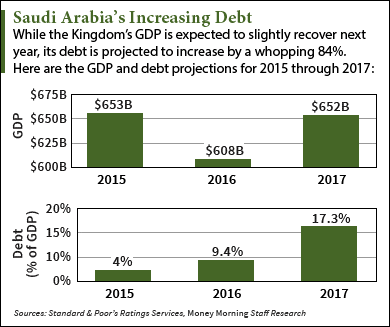 Saudi Arabia's debt is higher than most people think. In fact, its fiscal deficit is projected to hit a decade high of 17.3% in 2017.

That's why ratings agency Standard & Poor's has cut the country's debt rating twice since last October. A country's rating grades how risky a country's economy is for foreign investors. Successive downgrades make it more expensive for the Saudi government to borrow money on the global market.

After the October downgrade, S&P projected the country's deficit will hit 10% of GDP in 2016. But the agency said last month that projection was too optimistic as the deficit is now expected to be roughly 13%.

"In our view, the decline in oil prices will have a marked and lasting impact on Saudi Arabia's fiscal and economic indicators given its high dependence on oil," S&P noted in its downgrade report on Feb. 17.

"High dependence" is an understatement. That's because about 80% of Saudi Arabia's revenue comes from oil exports, which led to a fiscal deficit of $98 billion last year due to the oil price plunge.

But there's one way out of this Saudi Arabia debt situation. And it involves the Kingdom selling this one asset worth roughly $2 trillion...

A $2 Trillion Way Out of the Saudi Arabia Debt Situation: Chart No. 2

To alleviate the Saudi Arabia debt crisis, the Kingdom is considering taking Saudi Aramco public in 2016. 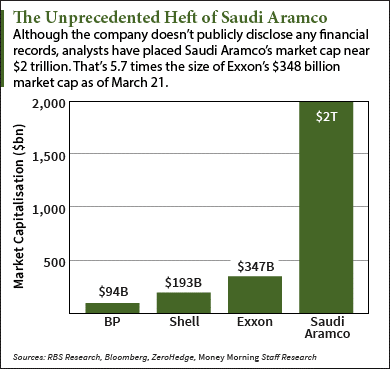 Saudi Arabian Oil Co., popularly known as Saudi Aramco, is the country's state-owned oil colossus and by far the most valuable company on the planet. By producing more than 10% of global oil supply every day, it has dominated the global energy industry for over 70 years.

In OPEC's 2014 report, Aramco said it sits on 266.6 billion barrels of crude oil reserves. That dwarfs the 24.8 billion (as of December 2015) owned by Exxon - the largest independent oil corporation in the world.

A Saudi Aramco IPO representing even a small slice of the company could raise billions of dollars for the country and become the largest IPO in history. Bloomberg and RBS Research analysts estimate the company would have a $2 trillion market cap after hitting the market. That's about 565% higher than Exxon's market cap.

With debt projected to surge over the long term, the Kingdom is looking for a quick way to inject money into the economy. That might come at the expense of selling its crown jewel to the public.

How does a country that has $632 billion of international reserves get in debt? That doesn't make sense. They used around $100 billion this year to balance their budget deficit. It isn't a debt, it's recalling of their international reserves.
Let's assume the article is right and they are going in debt with that $98, which is wrong, the analysis and charts presented are based on assumption that oil sill stay at 30s and it won't