Dow Jones Industrial Average News, 3/23/2016: With volumes low during this short week of trading, financial news outlets are getting repetitive: falling oil prices, bull market speculation, President Obama's travels. The real problem is they aren't telling you where to put your money and how to play defense against the growing number of forces that threaten it right now.

But Money Morning experts are preparing readers for what comes next week, from the U.S. Federal Reserve's upside-down policy decisions to the coming Super Crash in the financial sector. Use this week of light volumes and low volatility to set yourself up for what we expect to be a very wild April. 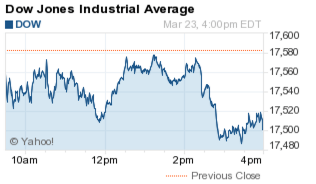 It's important to have a strategy with oil, particularly as Wall Street keeps distorting the markets through short-term trading. Here's Money Morning Global Energy Strategy Dr. Kent Moors and his 15 simple steps that you can use to beat Wall Street at its own game. You won't believe how profitable No. 6 is.

But the big talk today was about the housing sector. While the mainstream press is trying to reassure Americans there isn't reason to worry, the housing market is showing some serious cracks – much different than what we saw last decade. Mortgage applications slipped last month, the latest sign that wannabe homeowners are unable to access credit. That figure comes two days after existing home sales slumped by more than 7% in a month. On the positive end, new single-family home sales increased 2% in February, although the bulk of the sales occurred in the western portion of the United States. New home sales fell a staggering 24% in the northeast and nearly 18% in the midwest. The U.S. Commerce Department naturally blamed snow storms instead of the ongoing credit crunch that has made it harder for first-time buyers to purchase.

Oil prices have suffered one of the worst crashes in modern history. But despite today's losses, WTI prices have seen a strong rally over the last month, and there's one reason why they'll keep going higher in 2016 and beyond...