Social Security -- as it presently exists -- is on an unsustainable path...

The program is on track to burn through its remaining cash reserves by 2035. The retirement of baby boomers is pushing the worker-to-beneficiary ratio ever lower. Meanwhile, retirees themselves are living longer than ever before. 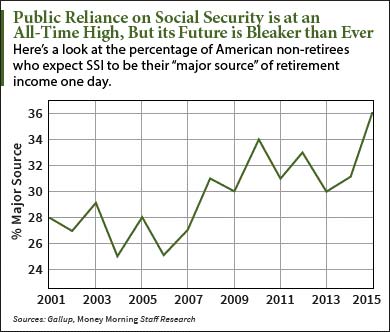 In spite of this looming instability, U.S. non-retirees are at an all-time high this century when it comes to claiming they'll rely on Social Security Income (SSI) in their retirement, reported an April 2015 Gallup poll. As of a year ago, 36% of non-retirees expect to rely heavily on SSI. That's about eight percentage points higher than responses in 2005.

One of the most controversial proposals to fix the shaky program is to partially privatize it. Currently, Social Security is housed by the Social Security Administration - an agency that is part of the federal government. Privatization would allow workers to manage their own retirement funds through personal investment accounts.

But should we privatize Social Security?

Here are the three best arguments for and against Social Security privatization...

Should We Privatize Social Security? The Pros and Cons

Argument No. 2: People should/shouldn't be in charge of their own Social Security income.

For more information on how to keep your retirement benefits from suffering the same fate as the entire Social Security program itself - including information on 11 soon-to-be-banned loopholes you may still be able to take advantage of - click here...

All the money borrowed by the past presidents should be paid back. That would fix the Social Security problem.

how about the government replaces ALL of the funds "borrowed" from the social security program, and the interest from that money goes back into social security; then we evaluate the situation of our program. I'll bet the numbers change a lot just from the interest earnings that will be gained from the money instead of the lack of earnings from the I.O.U.'s written from the theft of the money pool that should be earning more money from said intrest.

If $1000 is put into a child's account at birth and compounds at 3 percent per
month how much will they have at age 65?