"What is Brexit?" is a question readers have been asking us throughout 2016. The term "Brexit" has been making headlines all year, and this will continue to be one of the biggest financial stories of 2016.

That's why we've answered the question "what is Brexit?" And we've also dug deeper into what exactly a Brexit will mean for your money this year. First, here's the definition… 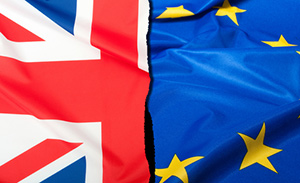 Brexit is an abbreviation of "British exit" and refers to the possibility that Britain will withdraw from the European Union. It mirrors the term "Grexit," which was used in 2015 when Greece mulled leaving the Eurozone and adopting a new currency.

But Britain is considering opting out of the European Union, not the Eurozone. Britain has never adopted the euro, so it already has one foot out the door.

The EU is an economic and political union of 28 countries. The Eurozone is the group of EU nations whose national currency is the euro.

The EU was created in 1993 to create unity among the European nations. Each of the countries within the Union are independent, but they agree to trade under the agreements made between the nations.

The Eurozone, meanwhile, has 17 member nations who all use the euro.
Britain will hold an in-out referendum on its EU membership on June 23. The results of that meeting will determine whether a Brexit is coming.

While the Brexit is of main concern to those in Europe, the decision will still have a huge impact on global markets, too. And that means your money will be impacted in 2016…

What Is Brexit and What Does It Mean for My Money?

The EU is Britain's largest trade partner. Since 1973, British trade with other EU countries has risen rapidly even as the European economy has slowed. The EU now takes over 51% of British export goods, and close to 45% when services are added in.

So you see, the EU and Britain need each other. That's why an exit from the EU is a big deal.

If Britain votes to leave the EU, the government has not yet clarified which new trading arrangements would replace the existing free-trade arrangement with the EU. That's why there's so much uncertainty about how UK businesses would be affected.

And a Brexit means UK businesses would have to deal with border controls when their supplies or sales cross the UK-EU border. Controls would run the gamut from satisfying rules of origin to substantial increases in import duties.

Britain might manage to strike a deal with the EU after a Brexit where it would be part of the European Economic Area (EEA). That would mean goods imported from Spain (for example) would still come in duty-free to the UK because there is free trade between EU and EEA members. Still, the importer would need to present documents to UK border authorities that the goods were indeed made in the EU and not merely rebranded there to bypass duties levied on non-EU countries.

If Britain is not able to immediately strike a trade deal with the EU after a Brexit, import duties negotiated at the World Trade Organization would kick in and VAT (value-added taxes) would have to be collected at the border. An importer would no longer have the convenience of combining those duties with domestic VAT payments.

In short, a British vote to leave the EU would mean an end to the UK's access to free movement of goods. The results would be significant administrative burdens as well as steep financial consequences.

And that's far from the only major change we'd see. A Brexit would also have a major impact on investors…

What Brexit Means for Investors

Uncertainty over the EU referendum has already affected the UK economy.

The country's currency has experienced a sharp decline since the start of 2016. There has also been a delay in planned investment in the UK by domestic and foreign businesses deferring projects until an outcome has been decided.

Investors can expect both forces to intensify in the weeks leading up to the June 23 vote.

Stocks in Britain have been rocky this year because of the Brexit discussions. Investment banks, including Wells Fargo, have been advising clients not to take large positions in British-based stocks as their profits are likely to be jeopardized.

All multinational stocks, however, will experience some kind of jolt from a Brexit.

British divisions of U.S. multinational companies drive corporate profits. Some 9% of all foreign profits generated by U.S. companies come from the UK.

If Britain votes to "Bremain," global stocks could stage a mild relief rally, but nothing too dramatic is expected.