From June 2014 to January 2016, worldwide oil output increased from 92.6 million barrels per day to 96.5 million, while oil prices fell more than 60%. In the United States alone, total oil inventories currently sit at 532.5 million barrels – the highest level in more than 80 years.

But a recent report from one of the world's leading energy agencies shows a 289 million barrel discrepancy in last year's oil supply data. 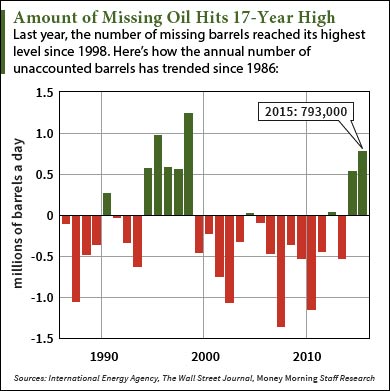 In its oil market report released on March 11, the International Energy Agency (IEA) said an average of 793,000 barrels of oil a day were unaccounted for in 2015. That comes out to a yearly total of 289 million missing barrels. In the fourth quarter, the number reached as high as 1.1 million, which is nearly half of the estimated excess supply during that period.

For oil investors, this revelation is shocking for two reasons…

First, it's the highest number of missing barrels in 17 years. Back in 1998, the Government Accountability Office (GAO), which works for the U.S. Congress, was asked to examine the IEA's data.

The GAO found that members of the Organization for Economic Cooperation and Development (OECD) – a group of 34 countries focused on collective economic gain – were more cooperative in the data-collecting process than non-OECD members. That's because some OPEC countries, including Libya, Iraq, and Venezuela, aren't OECD members and keep their oil operations under wraps.

But the second reason why it's so shocking is its effect on oil prices.

The plunge in the West Texas Intermediate (WTI) crude oil price in 2015 was caused by consistently high supply numbers. That led investors to believe production was significantly outpacing demand.

If 289 million barrels went missing – or simply never existed at all due to accounting errors – then the pressure on prices over the last year has been hugely overstated.

And that also means prices will rise more quickly since oil supply is tighter than most analysts realize.

Money Morning Global Energy Strategist Dr. Kent Moors – a 40-year veteran of the oil industry who's served as an advisor to U.S. and Russian energy agencies – says WTI crude oil prices are in for a strong rebound this year thanks to falling U.S. inventories.

And we've found one chart that shows why supply will drop…

Why the Excess Oil Supply Will Decline in 2016 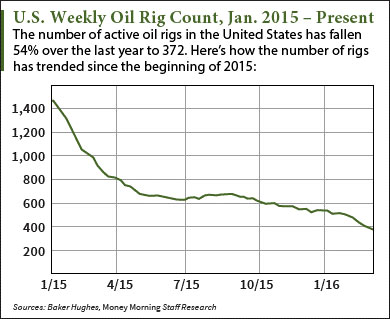 Baker Hughes Inc. (NYSE: BHI) – one of the largest oil field services companies in the world – tallies the number of operational oil and gas rigs in North America every week. Since January 2015, the number of active U.S. oil rigs has declined a whopping 73% from 1,421 to 372 as of March 24. This most recent count is the lowest since the week of Nov. 13, 2009.

"The U.S. rig count has declined precipitously… that can't help but lead to a drop in supply, especially when it comes to shale or tight oil," Moors said. "It's only a matter of time now before we start to see a reduction in supply on the American side of the market."

Domestic oversupply will also be relieved by increasing demand. The U.S. Energy Information Administration (EIA) reports global consumption will reach 96.5 million barrels a day in 2017 – up nearly 3% from 93.8 million in 2015.

The fact that the excess oil supply may have been significantly overstated because of missing oil only strengthens this argument.

Alex McGuire is an associate editor for Money Morning who writes about oil prices. Follow him on Twitter for the biggest updates on the price of crude oil today.

Why Oil and Stocks Have Been Dancing in Lockstep: Throughout crude's lengthy decline, stocks tended to mirror any movement in oil, especially to the downside. Common sense suggests some signals would affect both, but lately, they've instead been moving in almost lockstep connection. It seems common sense isn't in charge of the markets any more…