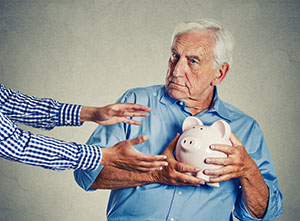 Social Security is unsustainable as it presently operates. The program's cash reserves are expected to diminish completely by 2035. And it may be past time to fix the problem.

Whatever the fate of Social Security, we can be certain of one thing: its initial design has failed us.

There are many who aren't surprised. They say Social Security is, and has always been, one big Ponzi scheme.

The idea isn't for folks in tinfoil hats...

There is real truth to the argument.

One needn't look much further than a new, infuriating report...

A Ponzi scheme, according to the U.S. Securities and Exchange Commission, is "...an investment fraud that involves the payment of purported returns to existing investors from funds contributed by new investors."

That sounds a lot like how Social Security works.

After all, initial "investors" in Social Security's scheme, who paid into the system for a few years before receiving guaranteed minimum benefits, came away with windfall profits - just like those who invest in Ponzi schemes first.

For example, Ida May Fuller, the first recipient of Social Security, paid $22.54 in Social Security taxes and collected $22,888.92 over the course of her life after she began collecting on Nov. 4, 1939.

Social Security has undergone significant changes since Fuller received her first check, including the addition of disability benefits in 1956.

The latest overhaul came in 1983, when the program was on the brink of insolvency. Congress increased payroll taxes, cut benefits, and gradually extended the age when retirees can claim full benefits. The changes shored up Social Security's finances so it could absorb the initial wave of retiring baby boomers.

Soon, however, that 100% get-back-what-you-were-promised guarantee is going to be impossible to fulfill... 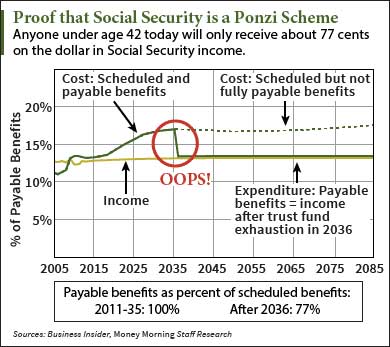 A report released July 17, 2015, by Jeffrey D. Zients, director of the National Economic Council, and Shaun Donovan, President Barack Obama's budget director, revealed that income to the Social Security retirement and disability trust funds would only pay out about 77% of what "investors" put in starting in 2036.

This means that anyone 42 years of age or under - as of right now - can expect to get a return of $0.77 on the dollar when they retire.

So why hasn't the Social Security program completely crumbled if it's a Ponzi scheme, like all Ponzi schemes eventually do?

Because it's backed by the federal government. And its investors are required to invest.

Most successful program ever enacted
for American citizens It should be funded sufficiently through taxes
(services cost money) Working people
really don't mind paying to fund their
later years .The problem is they borrow
from it to pay other bills.(should not
be allowed) Should not be privatized
or speculated (stock market) Best return on investment around

Funny how you fail to mention, how when he payroll tax put more money in the system, it was spent by the government. Repay the IOUs.