The Tesla stock price is up 21% in the last month, and the company is now preparing for its most highly anticipated event of 2016 this week. 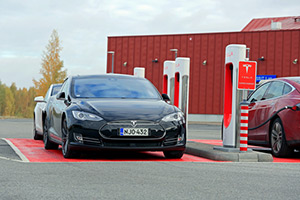 On Thursday, March 31, Tesla Motors Inc. (Nasdaq: TSLA) will unveil its most affordable electric car to date, the Model 3. The mystery around the new Tesla Model 3 has only added to the anticipation.

And that anticipation has many investors asking us whether they should buy Tesla stock ahead of the event. Before we get to how we're playing TSLA stock in 2016, here's what we know about the Tesla Model 3 so far…

Tesla stock should experience heavy volatility this week as investors anticipate the event. But there is one clear way to play TSLA now. For anyone asking "should I buy Tesla stock now?" – here's your answer…

How to Play Tesla Stock as Model 3 Event Approaches

Money Morning Technical Trading Specialist D.R. Barton has been bullish on the Tesla stock price all year, saying it's "head and shoulders ahead in the electric car front."

And with worldwide revenue from electric vehicles forecast to bring in $488.54 billion by 2030, Tesla stock needs an affordable vehicle like the Model 3 to appeal to the masses.

Tesla shares are up a meteoric 454.51% over the last three years and 890.54% over the last five. The Model 3 could send the Tesla stock price even higher. The company has improved production and delivery times, which will boost profits. And Tesla has done so without compromises. Tesla is revered for building great cars.

Still, with the kind of volatility Tesla and global markets have experienced this year, TSLA stock is not for short-term investors. Tesla stock is a momentum play, so any negative news story has the potential to send shares lower in the short term.

But for long-term investors looking to buy and hold a stock for five to 10 years, TSLA stock is one of our favorite picks.