When the U.S. Federal Reserve says jump, the markets obey. The Dow Jones Industrial Average had a strong day as Fed Chair Janet Yellen offered another dovish outlook on the U.S. economy and related monetary policy. The S&P 500 was back in the black for 2016 as traders reacted to expectations the central bank will not increase rates in April. It's no wonder that 93% of all movement in the markets over the last eight years is directly correlated to the actions of the Federal Reserve. 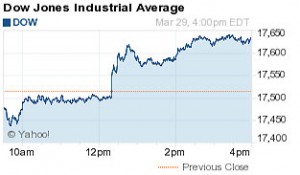 Oil prices fell sharply as domestic crude inventories are poised to hit new record highs and optimism over a possible energy freeze is fleeting. Investors are selling on the recent price rally that has seen crude prices tick up more than 45% since mid-February. OPEC and a handful of major global suppliers are set to meet in Doha, Qatar, on April 17 to discuss a production freeze in order to offer price support to global energy commodities. However, Iran is unlikely to take part in the deal, and that has traders fleeing. Both WTI crude and Brent crude prices fell by 2.8% today.

On the economic front, the Case-Schiller Index showed that average home prices increased by 5.7% in January. Housing prices are ticking up as supply in the market remains tight. That was positive news for the construction sector. Shares of homebuilder Lennar Corp. (NYSE: LEN) added 3.2% after the firm beat Wall Street estimates for both its top and bottom lines. The company said the average home sales price jumped by 12% year over year to $365,000. Meanwhile, it said its backlog is up 13%, while deliveries increased by 12%.

But the big talk today was about Federal Reserve Chair Janet Yellen. The central bank leader offered another "dovish" speech today, suggesting that she expects the U.S. central bank to increase interest rates gradually. Yellen admitted ongoing pressures around the world could weigh on the U.S. economy and did not offer a timetable on when we can expect additional hikes to interest rates. The U.S. economy does not face any pronounced short-term domestic threats; however, Yellen said such an assessment can be affected by "considerable uncertainty." The next FOMC statement is slated for April 27. According to CME Fed Watch, there is a 7% chance that the central bank hikes rates in April.

Oil prices have suffered one of the worst crashes in modern history. But despite today's losses, WTI prices have seen a strong rally over the last month, and there's one reason why they'll keep going higher in 2016 and beyond...

Negative Interest Rates Will Kill America's Free Market... Negative interest rates are the latest central bank "flavor of the month," and the fact that this disastrous policy hasn't worked in Europe - or anywhere - won't stop the Federal Reserve from taking NIRP for a spin in the United States. Now's your chance to gain immediate protection from the downside - and even position yourself to profit - when Team Yellen takes rates negative. Don't delay...