The U.S. dollar has become the world's largest fiat currency experiment ever. Not only is it the world's reserve currency, but numerous other nations have either adopted it as their own, used it to peg their own currency, or widely accept it to settle transactions.

Interest rates, precious metals, agricultural products, and energy are all priced in dollars.

Famously, the U.S. government pledged its support to the Saudi royal family – so long as the House of Saud accepted oil payments in "petrodollars" only.

But I'm seeing evidence that throws the dollar's long-term health and survival into doubt. I don't think it's going to disappear tomorrow, of course, but its dominance is likely on the wane.

That's bad news for investors who aren't ready to move with the big changes, but it could be one of the biggest opportunities of this century…

Closing In on a Secular Peak

The technicals are my favorite way of determining whether the dollar is relatively over or undervalued.

You see, in 2014 the U.S. Dollar Index (DXY) began a market-shaking run higher, gaining 25% in less than nine short months. That's like sprinting at top speed… for five miles – especially when you're the world's reserve currency.

Anticipating the end of rapid expansion in the Fed's balance sheet likely spurred the dollar higher.

And yet, even that hefty gain in the DXY is hardly a blip compared to the cyclical run-ups we've seen previously, for instance in the early 1980s, and again in the early 2000s. 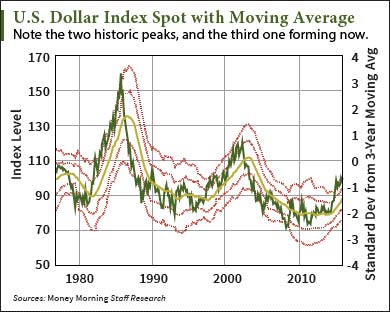 Now, since 1985 there's been a long-term declining trend in the DXY.

In the last 40 years, it has had two secular peaks, which really jump out on the graph here. The first was in 1985 near the 160 level, then it peaked again in 2002 at the 120 level. It's difficult to say with certainty, but the strength we experienced in the past two years may well have run its course, forming the latest peak.

The DXY has made a few runs at the 100 level since March 2015, but each time retreated. It's now losing momentum, as indicated by the Relative Strength Index (RSI) and Moving Average Convergence/Divergence (MACD) indicators. 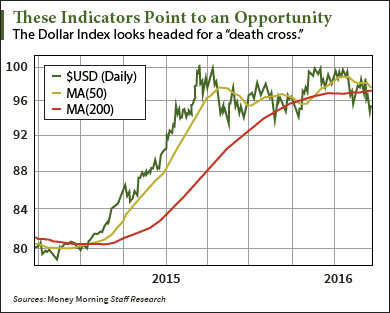 From a policy perspective, it's interesting to note that the dollar rose in anticipation of the end of the Fed's quantitative easing (QE) program. The official taper was announced on Oct. 29, 2014, yet the dollar started higher beginning in July that year, then peaked four-and-a-half months later.

In June 2015 the market was forecasting only slightly better than even odds that the first rate hike would come in December. That did come, but the market convulsed because it decided the move was no longer appropriate. At the time, Fed Open Market Committee (FOMC) members forecast four more hikes during 2016. But by mid-February, it was already clear the market was only pricing in two rate hikes for this year.

Often the dollar will price in a rate hike cycle in advance of its start and actually weaken as it comes to fruition. So by this measure, the outlook for the dollar is negative.

The single largest component of the DXY is the euro, representing a whopping 57.6% of the index. So substantial moves in the euro have a large impact on the dollar. The euro has recently strengthened against the dollar and may be about to get even stronger.

And yet, ECB chief Mario Draghi announced on March 10, 2016, that he would increase the monthly bond-purchase program from €60 billion to €80 billion monthly and lower interest rates even further into negative territory, from -0.3% to -0.4%.

This would naturally lead observers to expect the euro to lose relative value.

But the exact opposite happened, with the euro/dollar exchange rate moving from 1.0989 on that day to 1.1318 in just over a week. Perhaps it's because Draghi indicated that "from today's perspective, and taking into account the support of our measures to growth and inflation, we don't anticipate that it will be necessary to reduce rates further."

If that's the case, it would mirror the U.S. experience, which saw its stock markets and currency gain strength soon after the Fed's stimulus began back in 2009. Which would imply the euro could continue higher from here, creating stronger headwinds for the U.S. dollar.

As we expect continued weakness to play out for the greenback, the logical profit play is hard assets priced in dollars and poised to benefit from that weakness.

I've got just the thing…

The smart move in advance of this decline is to take a position in the iShares MSCI Global Metals & Mining Producers ETF (NYSE Arca: PICK).

Much like the price of gold itself (and right around the same time in late January), PICK put in a bottom and has absolutely surged by nearly 40% since. And the 50-day moving average has recently turned sharply upwards. 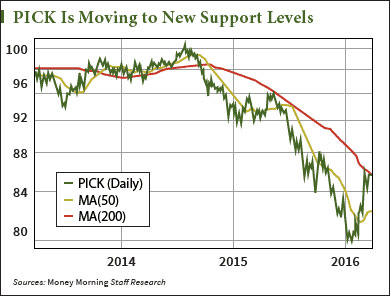 I suggest you buy half your total position now and another 50% when PICK regains the 200-day moving average level and holds above it, which is where it last found support. Use a hard closing stop at $7.09, which is the recent low.

If a true bull returns, we could see PICK regain $14 in short order, with a strong chance of regaining its 2014 highs near $19.

With this kind of setup, your downside risk is about 27%, but your upside could be as much as 100%.

Remember, as the euro enters a cycle of strength and the dollar continues to weaken for all the reasons outlined earlier, producers of precious and base metals are likely to be amongst the biggest beneficiaries.

The dollar is headed down, but gold and gold stocks are headed straight up. Now is the right time to buy, and in his 2016 Gold Profit Playbook, Michael Lewitt shows you his favorite miners, ETFs and physical gold dealers – plus strategies on how and where to buy. Then, twice each week, Michael will show you gold and other protective strategies for dealing with the coming $200 trillion "Super Crash." Click here for the Gold Profit Playbook and his free Sure Money investor service.

You write: "PICK holds a great cross-section of companies representative of the precious and base metals sector."

But the ETF tracks an index of Metals & Mining Producers EX GOLD & SILVER. So, it is not supposed to hold any Precious Metals producers.

If any of its holding produce precious metals it is incidental (like silver from copper mining) but not as their main operation.

Thanks for your comments. You’re right, that any precious metals Production from PICK’s holdings is incidental. It is however, a nice bonus. Sorry for the oversight on my part.