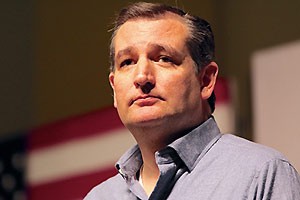 A Ted Cruz super PAC made a curious donation back in June 2015...

It gave half a million dollars to former tech executive Carly Fiorina's super PAC, Carly for America. The Washington Post first broke the story back in late July.

Super PACs that explicitly support a candidate almost never give in support of other rival candidates. On top of that, at the time, Fiorina was one of Texas Sen. Ted Cruz's main Republican opponents in the 2016 presidential race.

That's why the donation was such a mystery -- even The Washington Post piece didn't offer an explanation. It was so uncanny that the Federal Election Commission flagged the activity.

But recent events have sparked conspiracy theories that connect the dots between Cruz, Fiorina, and the $500,000 gift...

One theory is that the donation may have been hush money -- part of a cover up for Cruz's alleged sex scandal.

You see, the controversy behind the donation resurfaced after Cruz's recent affair allegations by the National Enquirer. Fiorina's deputy campaign manager Sarah Isgur Flores is one of the alleged mistresses in the supposed sex scandal.

Some suspect the donation was "hush money" to keep Fiorina quiet about the alleged affair.

The plot gets even dicier since Fiorina endorsed Cruz after suspending her campaign back in February. Watch the video below to see Fiorina and Cruz responding to Cruz's affair allegations on March 23. Notice how neither Cruz nor Fiorina explicitly deny the allegations of adultery, with Cruz instead calling the National Enquirer story "garbage."

Another theory suggests Fiorina's suspended campaign is illegally coordinating with another anti-Trump super PAC, Make America Awesome. Under FEC guidelines, it's illegal for campaigns to coordinate with super PACs in any way.

After Fiorina suspended her campaign, Liz Mayer, a former Fiorina campaign employee, set up "Make America Awesome," which uses the address: PO Box 26141, Alexandria, VA, 22313 - the same address as Fiorina's campaign headquarters. Make America Awesome is the super PAC that spread the promiscuous photo of Melania Trump in GQ Magazine last week. The theory posits that the Fiorina and Cruz camps are collaborating with Make America Awesome to attack Trump...

In an email to CBS in October 2015, Keep the Promise President Kellyanne Conway responded about the donation:

Keep the Promise I made the donation in June to Ms. Fiorina at that time because we thought she had important things to say that weren't being heard, including her poignant and effective criticism of Mrs. Clinton, at the time, the likely Democratic nominee. However, we are all in for Ted Cruz for President, as our current activities demonstrate, and will continue to support him and his message all the way to the White House."

What do you think about the strange donation a Ted Cruz super PAC made to his former rival? Leave your thoughts in the comments section below.

Beyond Obamacare: As controversial as Obamacare has been, it doesn't go nearly far enough for Bernie Sanders. His healthcare plan proposal, "Medicare for All," is essentially the single-payer type of system common in much of Europe and Canada. In short, the government runs the healthcare system and everyone is covered for everything. Sounds great. But you'll be shocked when you see what it's going to cost...

What about the hacked Ashley-Madison and Ted Cruz was leaked to be a subscriber along with Josh Duggar. It's a "dating service," that is, hooker service for married men. Why don't you all mention that?

Yes I remember when that all was revealed..I knew Ted was and is an adulterer..But in today's world this is just another day at the office..Bill Clinton was impeached because he lied about Monica and John Edwards Fathered a Child with another woman while his wife was dying of Cancer! Then there was Marilyn Monroe and Bobby and John Kennedy and they also lied about their indiscretions ..Also it has been reported Cruz fathered a Child in 2012.
How can we have him in the WH when we know what He did and probably still does. We live in a sad sad day..I get very discouraged with all these things..Carly Fiorina stole her husband she has now from another woman and when her husbands Daughter died she said it was her daughter but the girls mom wrote on FB that Carly was not her mother she was..Carly tried using that for the bleeding heart Dems and Republicans to feel sorry and Pity her..God help us lean heavily on you because this world right now satan is the god of this world 2 Cor 4:4..God is allowing it…But today God is doing one thing and that is building his Body for heavenly Places..We wait on the Lord..

how strange it is that the media are not jumping all over this donation to a rival campaign and the coordination between two PACs. if this involved Trump there would be 24/7 coverage for months.

why is the media cheating their viewers and customers? this is so reprehensible.

The reason isn't the mythical sex scandal. It was hush money to cover up Cruz's allegiance to The Venusians and their plot to take over the world.

I read it in the Enquirer.

It is over. Go back to Canada. The US does not want you.

I'm sick to say Ted Cruz lost the election the minute he named Carly as his running mate. She buts in and doesn't even let Ted Cruz answer a question. Does he not see she will take completely over the campaign and if by some chance he could win the election he will have a python in Carly squeezing the life out of him. He will never be President because she will take over. It has shown his weakness in letting her just take over. He cut his own throat!!!!