Janet Yellen and her merry band of central bankers are hinting that the U.S. Federal Reserve won't increase interest rates in April, fueling a Dow Jones Industrial Average rally today. It's become increasingly clear that the central bank's chatter about four interest rate hikes in 2016 was little more than nonsense. Traders certainly never fell for it. The CME FedWatch projects just a 7% chance of a rate hike in April, and the probability of the next hike doesn't rise above 50% until December. 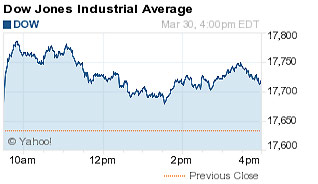 DJIA Today: The Dow Jones Rallies as the Fed Dilly-Dallies on Interest Rates

On the economic front, the private sector added 200,000 jobs in March, according to Automated Data Processing. That's slightly lower than what economists had forecast, but is another strong showing for the U.S. economy. With the Fed in focus, investors will be keeping a close eye on the March jobs report, which will be released by the U.S. Labor Department on Friday.

Despite the positive figures in the U.S. economy, there was more bad news for the health of the global economy. The Organization for Economic Cooperation and Development – which represents the world's most advanced economies – lowered its forecast for global growth and warned about global governments' abilities to fulfill pensions and pay bondholders. The OECD lowered its 2016 outlook from 3.3% to 3%. That decline could reduce the amount of revenue collected by governments needed to pay debt holders and fund pensions.

But the big talk – as always these days – was on the Fed and the timing of the central bank's next interest rate hike. Markets around the globe rallied after Yellen's speech on Tuesday suggested another rate hike was not imminent in April. Even though the rally has been strong in recent weeks, traders on the floor are discussing the upcoming earnings season – which they see as the real test for the markets. Chicago Federal Reserve Bank President Charles Evans said inflation levels are too low to justify a rate hike.

Oil prices have suffered one of the worst crashes in modern history. But WTI prices have seen a strong rally since February, and there's one reason why they'll keep going higher in 2016 and beyond…