Dow Jones Industrial Average News, 3/31/2016: With the March unemployment rate set for release tomorrow, traders took a wait-and-see approach on the final day of the first quarter. In some surprising news, gold prices were tracking for their best quarter since 1986, as the U.S. dollar continues to show weakness with the U.S. Federal Reserve electing to hold interest rates since the December 2015 FOMC meeting. 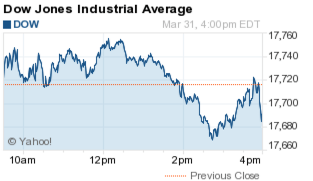 Banks just aren't making money on trading even though it's been one of the wildest quarters in recent memory. By mid-February, you'll recall stocks were off more than 10% for the year, fueled by a steep decline in energy stocks. However, as traders pushed aside concerns about a possible recession in the United States and the Fed backed away from additional rate hikes, the markets took off in March. The S&P 500 gained roughly 7% this month and pushed stocks to a 1% gain for the year. The Dow and the S&P 500 ended up with their second-straight quarterly wins.

WTI crude oil prices were mixed again, but finished one of the strongest one-month rallies we've seen in 11 months. WTI prices ended the month with a 13% gain.

On the economic front, pay attention to China's PMI readings, which will be released later tonight. Traders are still concerned about a possible economic slowdown in the world's second-largest economy. Manufacturing provides a strong level of insight into the health of the Chinese economy. The Caixin PMI reading for February was 48.0, a tick lower than the January reading of 48.4. Any figure under 50 signals a contraction for the sector.

But the big talk today was about upcoming Q1 2016 earnings, which are expected by S&P Capital to be the worst set of readings since 2009. While traders chattered about the the Federal Reserve's upcoming meeting on interest rates, energy volatility, the Brexit, and the U.S. election debacle, the earnings season is staring us in the face and it's going to be a scary one. According to Thomson Reuters, S&P 500 earnings are expected to slump by 6.9% in the first quarter, the worst numbers we've seen since the height of the financial crisis. It gets even worse for the energy sector, where the average energy profit figures are set to fall by a whopping 99% across the board.

Oil prices have suffered one of the worst crashes in modern history. But WTI prices just had their biggest monthly rally since April 2015, and there's one reason why they'll keep going higher in 2016 and beyond