California legislators made headlines Monday when they passed a $15-per-hour minimum wage that marks the largest deal to date in the national fight for higher working wages.

The thinking is that legions of poorly paid workers will be able to suddenly afford a higher standard of living and pay their way through life.

Today I'm going to tell you why and back up my case with plenty of cold, hard data.

Then, I'm going to share an investment recommendation with you that's perfectly positioned to profit from the reality distortion vortex that higher mandated wages represent.

The Argument No Politician Can Stomach in the Name of Profits

Let's get something out of the way first, though.

I'm not playing politics. In my capacity as Chief Investment Strategist, I don't have that luxury. My job is to help you make money - and that means giving you the facts behind the events of our day even if they run contrary to prevailing wisdom or popular thought.

Studies show conclusively that very few people actually receive truly low wages. Moreover, they make up a smaller segment of the workforce than they have historically.

That's because minimum wage earners fall into two primary groups that are hardly representative of the broader swath of the American public worker advocates and vote-hungry political types in both parties want you to believe - younger, usually school-age workers, and those who have left school. 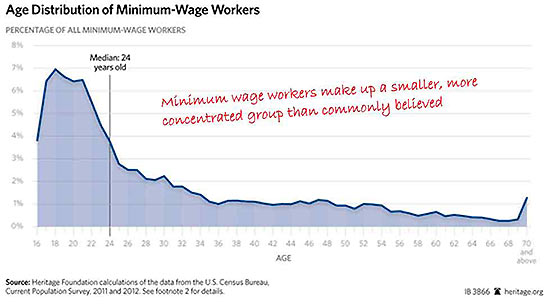 But more to the point, according to 2013 data from the U.S. Bureau of Labor Statistics, for example, there were 1.532 million hourly workers earning the federally mandated minimum of $7.25 an hour. Add in another 1.8 million tipped employees, students, disabled workers, and others, and you come up with 3.3 million workers at or below the federal minimum, or roughly 4.3% of America's 75.9 million hourly workers.

More to the point, only 0.8% of all Americans over the age of 25 are earning minimum wage, hardly the vast majority current political campaigns seem to suggest.

To put those same figures in context, those figures stood at 13.4% of hourly workers and 7.9% of all wage and salaried workers in 1979, which means that minimum-wage workers are quite literally earning their way up.

You can argue that raising the minimum wage by legislation - as opposed to market demand - doesn't have much impact if it happens slowly. Which is, of course, exactly what many politicians and advocacy groups are doing.

California Governor Jerry Brown, for example, said Monday that the plan raises the minimum wage in a "careful and responsible way" while also providing flexibility if budgetary conditions change.

That's a lot like telling a frog in increasingly hot water that he's not being cooked.

Studies also show that a 10% rise in minimum wage may result in 3% to 6% increases in unemployment, especially for the untrained and young.

Believe it or not, though, the most damning bit of evidence against higher minimum wages comes from one of its staunchest supporters in a report commissioned to explore the ramifications.

Michael Reich, a professor at UC Berkeley who chairs the Center on Wage and Employment Dynamics there, notes that a $15-per-hour minimum wage in Los Angeles will result in a "cumulative net reduction in GDP of $135 million by 2017 and $315 million by 2019″ in the LA area. Then he continues, saying that the rising minimum wage corresponds "to a cumulative net reduction in employment in Los Angeles City of 1,552 jobs by 2017 and 3,472 jobs by 2019."

You read that correctly.

What Reich is saying - and remember he's a supporter - is that the rise in minimum wages will make the economy smaller and make everybody poorer.

So much for the notion that raising wages eliminates poverty.

The real problem is something we've talked about many times. People living below the poverty line simply do not work - more than 67% as of 2013, with less than one in 10 working full-time, according to U.S. Census data.

Again, I'm not making this stuff up, nor am I passing judgement. The data is the data - higher minimum wage rates do NOT reduce poverty contrary to what politicians and advocacy groups want you to believe. Getting a full-time job does.

In fact, higher minimum wages have the complete opposite effect.

You know what happened next.

Labor unions rioted, the government went bankrupt, and thousands of jobs were eliminated as Greek companies shuttered their doors, downsized, or simply left for lower-priced countries in the Balkans.

Meanwhile, companies that could stay in business simply passed those costs through to consumers. Government subsidies rose and foreign companies withdrew operations, further reinforcing the negative spiral that started when their profit margins vanished.

Sadly, the lesson that somehow never gets learned remains the same - higher wages have to be earned... they cannot be legislated nor mandated.

When you get right down to it, what people really want is a higher minimum wage and for the cost of everything else to remain the same.

Imagine you own a company selling widgets for $20 apiece. Your cost is $5 for manufacturing and $5 for labor per widget, leaving $10 per unit in profit for purposes of our discussion.

Now imagine boosting wages to $10 per unit. Suddenly your profits have dropped by 50% to $5 per unit. Your workers are happy but your investors are probably furious because their earnings have just gotten trashed. Your stock price tanks to reflect the drop in your bottom line; that's what happens when companies lower earnings.

This leaves you with a tough choice. Either raise prices to $25 a widget and hope your customers don't buy less or continue to operate at a drastically reduced profit margin.

Assuming you can... continue to operate, that is.

The Congressional Budget Office estimates that that a $15 national minimum wage will cost this country 6.6 million jobs. Another report from Jeffrey Clemens and Michael Wither of the University of California at San Diego released in 2014 estimates 16.8 million jobs lost. Either way, higher minimum wages produce economic losses, not gains.

Think of the money you earn like a staircase full of people. If the person on the bottom steps up, everybody else must move up to make room. And, when that happens, every other worker with more skill and more education higher up the ladder suddenly demands more money.

Believe it or not, what I've told you so far isn't even the toughest part in all this.

What self-interested politicians in both parties anxious for their next vote will never acknowledge is that higher minimum wages will hurt those they're intended to help most.

Food, rent, healthcare... they'll all cost more because the labor that produces those things will cost more thanks to their vote. Chipotle, for example, raised prices 14% in San Francisco after - ta da - a 14% minimum wage bump there. Prices in Seattle jumped when that city made a similar move to higher minimums. Nearly every other state and city where there have been higher mandated wages has experienced the same situation.

Then there's the government's own programs.

Nobody is talking about this at the moment, but higher incomes may push workers who can least afford it into higher tax brackets while also putting them over the threshold for food stamps, Medicaid, and Obamacare thresholds for subsidized care.

Unfortunately, logic will not prevail.

We can talk about the data all day, but there's no way our country is going to go backwards on this issue. We will see a nationally mandated $15 an hour minimum wage sooner than most people think, because the 0.8% of the population who earn it are very vocal.

So you and your money have to go forward.

The best way to do that is to prioritize investments in high growth businesses with fortress-like balance sheets and the pricing power to maintain margins in the face of higher labor costs.

Not only is the company tied into the "Unstoppable Trend" we refer to as Medicine, but it's also tied into Demographics. Either way, trillions of dollars are going to get spent on companies channeling these Trends no matter what legislative madness comes our way.

And the company knows it.

Not many people remember this, but Aetna made headlines in January 2015 by announcing that it would raise minimum wages within the company to $16 an hour. That's a move that neatly sidesteps the issue at hand.

That tells me management clearly understands the linkage between getting ahead of mandated wages and the need to attract the very best and brightest employees who, I might add, helped earnings jump 38% year over year.

What's more, the company is sitting on more than $5 billion in cash, it pays a dividend that's surged 2,400% since 2010, and it's a key beneficiary to more legislative nonsense now that the government has guaranteed healthcare.

...but only if you're an investor.

Editor's Note: Companies like Aetna will continue to see windfalls thanks to government-mandated waves of new health insurance clients - but Keith has his eye on a company with even bigger profit potential no matter what Washington chooses to do. Its stock price doubled within six weeks after he first brought it to Total Wealth readers' attentions - and it's got plenty of room to run as it conquers another "Unstoppable Trend" projected to be worth $1.135 billion in just a few years. For a full and free report, sign up for Total Wealth here - it's free!

Can you send me a check

Keith:
Thanks for presenting the facts on this challenging issue. Not sure about AET as a bet, though, for this reason: Insurance companies need to put their surpluses (unpaid premiums – loss ratio) in safe bonds. With our idiot Central Bankers (worldwide!) moving to negative interest rates, how will insurance companies get a safe return on their portfolios? I'd love to hear your thoughts on this.