Intel stock hasn't exactly stood out over the past year, but the company's efforts to transition to promising areas of growth is about to change that.

That's why Intel Corp. (Nasdaq: INTC) is Money Morning's Pick of the Week.

"This is a stock you can count on for income and appreciation for years to come," said Money Morning Defense & Tech Specialist Michael A. Robinson.

Let's dig in to the story of this Silicon Valley icon to see why investors can't afford to ignore INTC stock...

Intel Corp: About the Company

Intel is one of the companies that helped give "Silicon Valley" its name. It was founded by engineers Robert Noyce and Gordon Moore in 1968. Noyce and Moore had worked together at Fairchild Semiconductor and left to found Intel. The name is short for Integrated Electronics.

Intel's first products were memory chips. In particular, its 1103 DRAM chip became popular because it could store more data than previous memory designs. On the heels of that success, Intel went public in 1971.

That was a big year for Intel. In addition to the IPO, Intel developed and produced an EPROM (erasable programmable read-only memory) chip as well as its first microprocessor, the 4004.

Microprocessors, the "brain" of a PC, turned out to be the product that made Intel a household name. (And a good thing, too, as the company lost nearly all of the memory chip business to Asian competitors by 1984.)

The biggest break came when International Business Machines Corp. (NYSE: IBM) chose the 8088 CPU for its first mass-produced PC. From then on, Intel CPUs became standard equipment on PCs, with most sporting an "Intel Inside" logo on the casing.

Intel helped its cause further by selling entire "motherboards" containing all the essential chips for a functioning PC. That opened the door for many smaller, low-cost PC makers to enter - and expand - the PC market.

The boom years of the 1990s gave way to stagnation in the 2000s, however, as PC growth slowed. Intel compounded that problem by underestimating the shift to mobile computing - a problem it eventually started to address.

Miscues aside, Intel remains the world leader in the semiconductor sector. Intel's revenue for 2015 was $55.9 billion, and the company employs 107,300. 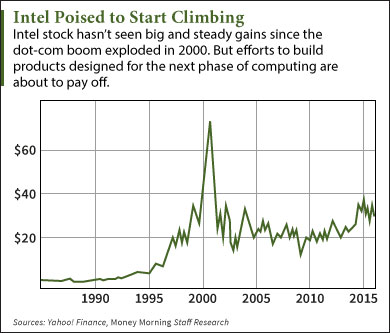 The explosion of the PC market from the mid-1980s through the 1990s sent the Intel stock price rocketing some 15,000% (well, until the dot-com crash brought it back to Earth).

Intel stock had a strong 2014, rising more than 45%, yet hasn't done much since. But Intel has made many strategic moves over the past few years designed to position it to take advantage of where computing is going next.

Here's what Intel has been doing - and why it will jolt INTC stock out of its doldrums...

Why INTC Stock Is a Buy

The sideways path Intel stock has been on for more than a decade has a lot to do with the company failing to jump on the mobile revolution with robust, lower-powered CPUs suited to smartphones and tablets.

Intel was forced to subsidize sales of its mobile chips to induce other companies to buy them, which cost the company billions.

But credit Intel management for taking that hard-earned lesson to heart. Even while it was playing catch-up in the mobile market, Intel was turning its focus to making chips for the next generation of computing.

"Intel has revamped products and introduced new ones designed to add sales in wearable technology, cloud-computing data centers, and Internet of Everything sensors," Robinson said.

Better news for Intel is that while PC revenue was twice that of its data center revenue, the profits for both are nearly equal. So as the shift continues, Intel's profits will grow. And more good news: Intel has 98% of the growing data center market.

Meanwhile, Intel is ahead of the Internet of Things (IoT) market with its Quark and Edison technologies. Both are tiny and perfectly suited to powering IoT devices, the number of which is expected to triple to 30 billion by 2020.

Intel has even found a way to beef up its memory chip business. Last July it unveiled a new kind of memory, 3D XPoint, that's 1,000 times faster than the memory used in smartphones.

And Robinson is particularly optimistic about one of Intel's more recent moves - into virtual reality. Just a few weeks ago, Intel acquired Replay Technologies, which presumably will get added to Intel's RealSense division. Intel is especially focused on augmented reality, which projects images onto real objects in the room with you.

That's a lot of catalysts - and ample reason to buy Intel stock.

Investing in Intel stock has lagged a bit because of last year's 1% fall in revenue and 2% drop in earnings. But as we've shown, the company is set up to reverse those trends dramatically over the next few years.

Looking further ahead, as more of Intel's strategies bear fruit, earnings will accelerate. Earnings per share are expected to hit $2.63 this year, so $3.00 by 2018 isn't a big stretch. At the current price/earnings ratio of 14, that gets you to $42. And as Intel proves it can grow, its P/E could edge a bit higher, pushing the Intel stock price into the mid-$40s. At $45, you're looking at a gain of more than 37%.

"Intel is moving aggressively to reduce its dependence on chips for the declining PC market," Robinson said. "This company gives investors nice stability along with a solid yield in a low interest environment."

In Case You Missed It: Our previous pick of the week is a major automaker. Its stock has slumped as Wall Street has soured on carmakers over the past year. But this carmaker isn't like the others. Find out why this automaker's forward-thinking strategy has made this stock a buy...