The Saudi Arabia debt crisis has already reached critical mass. The world's largest oil exporter ran a whopping $98 billion budget deficit in 2015, and the International Monetary Fund predicts the Saudis will be broke by 2020 if oil prices don't rebound from their current $37 level.

And a new report this week shows how one crucial component of Saudi Arabia's economy took a massive nosedive last month.

Before we get to that, here's a breakdown of the Saudi Arabia debt problem - and how bad it's expected to become through 2017... 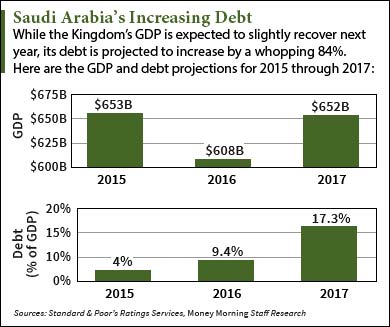 That's why ratings agency Standard & Poor's (S&P) lowered the nation's debt rating twice in the last six months. A country's debt rating is meant to assess the risk of a country's economy for foreign investors.

In February, S&P downgraded the country again from "A+" to "A-" (considered the middle of the "medium grade credit" range). These repeated downgrades make it more expensive for the government to borrow money on the global market.

The ratings agency went further by saying it doesn't expect the Saudi Arabia debt crisis to improve this year. In its latest downgrade report, S&P revised the country's projected 2016 budget deficit from 10% of GDP to 13%.

But another report this week conveys more bad news about the state of the Saudi economy. In fact, the data shows how one of the country's most important economic indicators just hit a four-year low.

Saudi Arabia's foreign-exchange currency holdings have plummeted over the last two years, and they saw another big decline in February. 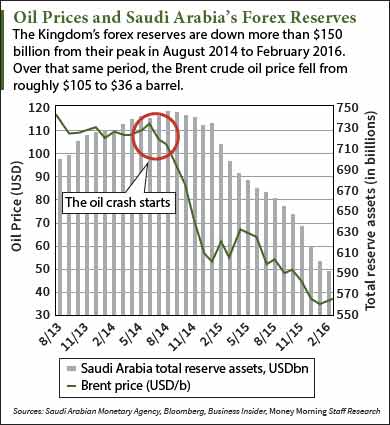 Foreign-exchange (forex) reserves are foreign currencies like the Japanese yen and British pound that are held in a country's central bank. They're used to make international payments and hedge against exchange rates in case the country's currency declines in value. The U.S. dollar is currently the main forex reserve held by other countries since commodities like oil and silver are priced in dollars.

According to banking company HSBC Holdings Plc. (NYSE ADR: HSBC), Saudi Arabia's forex assets declined by more than $150 billion from August 2014 to February 2016. That's due to the price of Brent crude oil - the global price benchmark - falling 66% over the same period. In its latest monthly report, HSBC said reserves fell another $9.4 billion to a total of $593 billion - the lowest since 2012.

The decline in forex reserves adds another problem to the Saudi Arabia debt crisis. Not only is debt climbing, but the country is also burning through billions in foreign cash due to the constraints of low oil prices. This could cause the Kingdom to rack up international debt and threaten global economic stability, much like Greece did in 2015.

But there's one way Saudi Arabia can fix its debt problem. The country could sell a small percentage of its $2 trillion crown jewel to the public in order to raise money.

If the Kingdom chooses this option, the sale would go down as the largest initial public offering in history...