There’s no doubt China is the world’s largest car market. But it’s equally “clear” that the world’s most populous nation is also suffering from some of the worst air pollution on Earth; pictures of masked citizens walking the streets of smog-choked cities are a fixture on the news.

Now, that’s not all down to cars, but China's leaders are nonetheless pushing that nation's automakers to improve their fuel standards. So by 2020 we should see the average Chinese-made car using 39% less fuel than models from 2008.

To meet this tough mandate, Chinese firms will begin rolling out "mild hybrids" – electric vehicles (EVs) powered by gasoline as well as by a new type of low-voltage hybrid car battery.

This development puts China at the epicenter of a dramatic technological breakthrough that's certain to roil the $75 billion battery market.

I want to show you a company that will help put us on the winning side of this shakeup in this sector of the automotive market.

You see, I've found a backdoor way to profit from this coming market disruption.

What’s Behind This Chinese “Power Play” 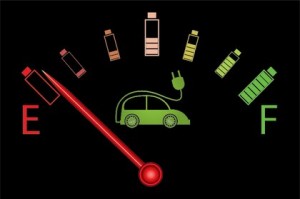 First, as I mentioned, this is the world's largest auto market, with annual sales well above 18 million units – a number that's expected to grow by about 5% a year. Second, China's move into low-voltage batteries shows just how vital electric vehicle (EV) tech has become.

Now that may not sound like much of an increase, but China will be producing 21.5 million cars a year pretty soon. So, the savings start to add up.

Here's the thing, these are much smaller batteries than the 200-volt lithium-ions used in most leading EVs on the road today. The 48-volt systems are also 70% less expensive.

The 48-volt breakthrough from China has caused huge debate among analysts as to its global impact. No one seems to know what portion of the EV battery market this will capture in the next five years.

But we do know it's a big market. Lux Research Inc. says the sector, which includes electric bikes, is worth an estimated $30 billion right now.

The forecasters didn't break it down by vehicle type, but if cars captured just 20% of the retail value, that would be a $6 billion global sector in its own right.

What we're looking for then is a "pick and shovel" play that stands to gain from the growth in EVs and hybrids, whether they use 48 volts, 200 volts, or some other approach yet to be discovered.

Turns out, there's a Japanese electronics giant that most people equate with televisions but is a global leader in lithium-ion battery cell production…

That company is Panasonic Corp. (OTCMKTS ADR: PCRFY). You might recall this brand from years gone by. Panasonic has built tape recorders, VCRs, radios, TVs, and many other consumer gadgets.

But Panasonic is moving away from its role in that cutthroat business. The firm's leaders have announced plans to streamline operations and boost higher-margin products.

That effort puts its battery tech front and center – the firm ranks as a world leader in making the cells that form the basis of lithium-ion battery packs.

It's a massive growth field. Global demand for lithium-ion batteries from cars to electronics should grow at least 20% a year through 2020, when Frost & Sullivan says it will be worth $75 billion.

The Tesla Connection: Get Ready for the "Gigafactory"

Tesla Motors Inc. (Nasdaq: TSLA) gets rave reviews for its award-winning electric cars. They are faster, safer, and much more efficient than any other EV on the market today.

Which explains why its stock is up more than 500% over the past three years.

Yet, that rising value depends on Panasonic – Tesla's "silent partner."

In fact, Tesla wouldn't be the success it is today without the EV cells that Panasonic makes.

Indeed, the two firms joined forces back in 2009. The next year, Panasonic invested $30 million in Tesla. And a year later, it agreed to supply enough EV cells for more than 80,000 Teslas.

And the value of that relationship keeps getting better. Just look at what's happening near Reno, Nevada.

There, Tesla will open its huge "Gigafactory" next year, which will allow it to reach its goal of making 500,000 cars a year – five times its 2015 output.

Just a few weeks ago, Panasonic confirmed it will invest up to $1.6 billion in the Tesla plant, which has a total price tag of about $5 billion. It's also stationing hundreds of its Japanese engineers in Nevada to ensure the new plant gets off to a great start.

Tesla needs the Gigafactory in part to fuel its growth in China. After all, Tesla believes the Chinese market for its high-tech luxury EVs will surpass U.S. sales by 2021.

For Tesla, the Chinese market is a no-brainer: China now has more millionaires (3.6 million) than the eight biggest European nations combined.

Tesla may end up building cars in China. But for the first few years, the Nevada plant will likely be the main battery supplier for global sales.

For its part, Panasonic embraces the notion of Chinese production.

At the end of 2015, the company announced plans to spend $400 million to build a lithium-ion battery plant in Dalian. When that plant opens in early 2017, it will be able to supply EV packs for 200,000 cars a year.

And that may not be enough. Thanks to robust government incentives, Chinese consumers bought more than 300,000 electric or hybrid vehicles in 2015, twice the level of just two years earlier.

Plus, there's more to Panasonic's auto goals than just EVs. The firm is stepping up efforts to supply navigation and safety systems as well as car sensors and a host of other advanced electronic parts.

Panasonic president Kazuhiro Tsuga recently told The Wall Street Journal: "The car is changing. It is getting to be an electrical object. We have those technologies, so I thought 'we need to shift our resources to automotive.'"

In other words, cars play a vital role in Panasonic’s intermediate- to long-term strategy for growth. The firm also is making products for smart homes and solar-power systems for home and industry.

Make no mistake. Panasonic is showing great progress in its turnaround. Sales peaked at around $77 billion back in fiscal 2011, falling to $69 billion in fiscal 2015.

But last year also marked the firm's best earnings in nearly a decade.

Now, because it's in a turnaround phase, Panasonic is a "special situation" tech play. But it has a lot of upside.

With this one move, you can ride along not just in the success of Tesla, but also grab a big share of the entire global EV market.

“After 48 years, it is the first time I haven’t had pain at all.” Doctors have discovered a method of switching off pain, anywhere in your body, almost instantly. It’s non-invasive, drug-free, and has no dangerous side effects. For patients suffering any kind of pain, the benefits are clear. But there’s a twist in the story. It’s also about to set off a period of economic nirvana. Click here to continue reading…