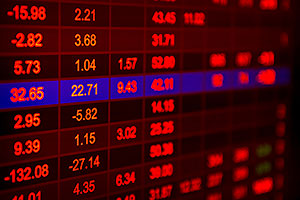 Dow Jones Industrial Average News, 4/1/2016: Today (Friday) the markets will be digesting the March jobs report, but the bigger news is that today is the first day of the second quarter.

It's looking pretty dangerous out here: S&P Capital projects Q2-2016 to produce the worst set of quarterly earnings reports since 2009. According to Thomson Reuters, S&P 500 earnings are expected to slump by 6.9% in the first quarter, the worst numbers we've seen since the height of the financial crisis. It gets even worse for the energy sector, where the average energy profit figures are set to fall by 99% across the board. No, this is not an April Fools joke.

There's plenty of good stock market news, stocks to watch, ways to profit and a busy economic calendar for April 1, 2016.

Dow Jones futures today projected an 85-point decline this morning after the U.S. Labor Department reported that the March unemployment rate increased to 5% and that the economy added 215,000 jobs for the month. Energy stocks were trailing due to a decline in oil prices.

Here's a breakdown of why the Dow is moving upward this morning.

This Penny Stock Will Double Your Money - And Save A Dying U.S. Industry: It's not easy to find a truly compelling penny stock, which is why this one is such a remarkable find. Not only is this green energy stock capable of a gain of 100% or more, it's just now rolling out technology with the potential to rescue the struggling coal industry. But this 21st century success story has only just begun, making now the perfect time to buy this stock... Read More...