No April Fools' joke: The Dow Jones Industrial Average kicked off the second quarter with a 107-point gain, despite a sharp downturn in global oil prices. The Dow Jones rallied on positive manufacturing data and news that the U.S. economy added more jobs than economists had anticipated. 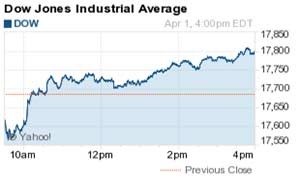 Auto stocks were in focus today with the monthly releases of vehicle sales. Shares of Ford Motor Co. (NYSE: F) fell 3% despite an 8% increase in domestic auto sales. Meanwhile, shares of General Motors Co. (NYSE: GM) were off 3.1% after the firm announced that March retail sales increased by nearly 6%. However, rental deliveries fell by a stunning 33%. That latter figure is further evidence of the impact of ride-sharing programs like Lyft and Uber, which reduce the need for car rental services at airports and in metropolitan areas.

S&P Capital projects Q2 2016 to produce the worst set of quarterly earnings reports since 2009. According to Thomson Reuters, S&P 500 earnings are expected to slump by 6.9% in the first quarter, the worst numbers we've seen since the height of the financial crisis. It gets even worse for the energy sector, where the average energy profit figures are set to fall by 99% across the board. As Money Morning Capital Wave Strategist Shah Gilani explains, this rally could be in trouble.

On the economic front, the U.S. Labor Department reported that the March unemployment rate ticked up slightly to 5% and the economy added 215,000 jobs for the month. Despite the stronger than expected report, it is unlikely to sway the U.S. Federal Reserve's position on monetary policy. Fed Chair Janet Yellen recently cut the number of expected hikes for 2016 from four to two, and the CME FedWatch foresees just a 7% probability of a rate hike in late April.

That said, Cleveland Fed President Loretta Mester turned a few ears when she said more interest rate hikes in 2016 would be "more appropriate" for the U.S. economy based on recent economic data and that the Fed should continue on a path to rate normalization.

But the big talk today was WTI crude oil prices, which slipped 4% to $36.79 and saw a weekly loss of 6%, while Brent crude fell 4.1%. Skepticism continues to rise over a possible deal between OPEC and non-OPEC producers to freeze oil output. Saudi Arabia's top energy leaders said they will not engage in a global production freeze unless Iran takes part. That had some global analysts projecting another sharp downturn in oil prices, perhaps lower than $30 per barrel, according to technical analysts at The ECU Group.

The Facebook Inc. (Nasdaq: FB) stock price is up nearly 11% this year. And there are three reasons why shares will continue to climb higher in 2016…