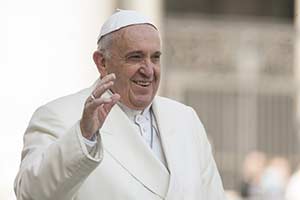 In a Feb. 2 Asia Times interview, the Pope told Holy See columnist Franscesco Sisci that the world should instead embrace China's rise.

Sisci took the pontiff's message to a seminar on Wednesday in Hong Kong. There, he outlined the "new geopolitics of the Vatican"...

He spoke of the pope's "new approach to China" - one of compassion and tolerance.

It's a promising sign of renewed diplomatic relations that the Vatican and the Red Dragon haven't enjoyed in over six decades.

But for China, repairing the association will depend on the Vatican's ties with Taiwan...

China's Problem with the Vatican

You see, China and Taiwan are at odds over a conflict in the South China Sea.

The two countries, along with a host of other South Pacific nations, all claim stakes to one or more maritime territories in the area.

This dispute has only heated up in 2016.

Right now, the Vatican is Taiwan's only European ally. If forsaken by the pope, Taipei may face an exodus of panicked Latin American diplomatic allies.

A touchy stand-off, to say the least.

Money Morning's own Chief Investment Strategist Keith Fitz-Gerald, who's spent time "in the trenches" of China and its growing markets over the past three decades, echoes Pope Francis' sentiment.

Here's why Fitz-Gerald says we should be excited about China's growth...

Chinese Growth Is an Opportunity

Fitz-Gerald is quick to point out that many critics of China say the country isn't democratic, that its economy is on the verge of death, and that it's in debt up to its eyeballs.

To this, Fitz-Gerald agrees: China's economy is slowing. Key gauges of Chinese economic activity - electric production and industrial output - have dropped in recent years. But that's because other services have expanded. Fitz-Gerald says it's important to look at consumption levels rather than just output levels. Consumption accounted for 51.2% of China's growth in 2014, a rise of 3% from 2013.

It's undeniable that China has emerged onto the world's stage. It is, after all, the second-largest economy on the globe.

Have a look at these numbers. They indicate something investors can get excited about -- the bigger-picture growth opportunities in China:

Fitz-Gerald says most Westerners simply don't want to imagine this is happening because it implies a complete loss of economic hegemony.

But, as the pope's sentiment also echoed, we shouldn't be afraid of Chinese growth.

It means excellent opportunities for investors - you just have to know where to look.

Money Morning Keith Fitz-Gerald speaks to Stuart Varney in October 2015 on why Chinese growth is good for American stocks.

China Is Killing the U.S. in Trade: The United States exported $116 billion to China in 2015 - which isn't bad. In fact, it's 30 times what it had been three decades ago, in 1985. But China exported more than four times that amount to the United States last year. Here's a look at exactly how that imbalance came to be...