The Tesla stock price today (Friday) soared 7% to $247.90 after the company debuted its new car for the masses. The TSLA stock price is now up 29.33% over the last month.

And we see the Tesla stock price climbing much higher than this in the long term. You see, Tesla's new vehicle will put the electric car company "head and shoulders" above its competition in a new $488 billion industry. 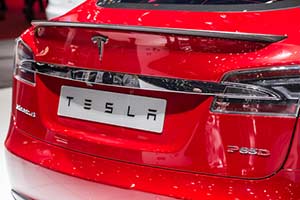 Before we get into that, here's some details about Thursday night's highly anticipated launch of the new Tesla Model 3.

In a grand gesture, Tesla Motors Inc. (Nasdaq: TSLA) CEO Elon Musk pulled the cover off the company's fourth vehicle last night. Dubbed the "everyman car" for its $35,000 price tag, the Model 3 sticker price is less than half that of Tesla's other vehicles.

Still, the Model 3 flaunts all the sleekness and sophistication of Tesla's other cars.

At least 20% smaller than the Model S, the Model 3 seats five comfortably. The windshield and back window nearly touch, which makes for an almost complete view of the sky over an occupant's head. The only thing in front of the driver are air-conditioning vents.

The Model 3 will be fitted with Tesla's "autopilot" features, which have helped the car become one of the safest on highways. A rectangular touchpad screen mounted on the dashboard between the front seats is the sole information display. The car's speed is displayed in the upper left corner within easy view of the driver.

And the Model 3 is fast. It is able to go from 0 to 60 mph in less than six seconds. The electric car is expected to get 215 miles on a charge.

Musk said he's "fairly confident" the first Model 3 vehicles will be delivered as planned by late 2017. The Fremont, Calif., factory where Tesla builds its cars used to produce nearly half a million cars annually when it was owned by General Motors Co. (NYSE: GM) and Toyota Motor Corp. (NYSE ADR: TM). So it shouldn't have any trouble meeting Tesla's needs for this third model. Also, Tesla's massive new Nevada Gigafactory should be able to produce more than enough lithium-ion batteries to meet demand.

Less than 12 hours after the Model 3 unveiling at Tesla's design studio in Hawthorne, Calif., the number of Model 3 reservations topped 150,000. One factor that may have spurred some people in the United States to place a Model 3 reservation is the $7,500 federal tax credit for buying an electric vehicle.

That incentive is currently scheduled to be phased out after an automaker sells 200,000 electric vehicles. At current sales projections, Tesla will run out of those tax credits sometime in 2018 - just as Model 3s start rolling off production lines.

The Tesla brand, like the stock, enjoys a kind of cult following. The Tesla Model 3 will be much less complex than its predecessors. Elon Musk has learned from issues ramping up production of the Model S and Model X, which both missed his initial production targets.

That's good news for Tesla customers and shareholders. But the best news is that Tesla has perfectly positioned itself to profit from a new $488 billion industry...

The introduction of a $35,000 vehicle is huge for Tesla, because its Model S sedan and Model X SUV retail for $70,000 and $80,000, respectively. The lower-priced model allows Tesla to tap into a whole new market.

And with worldwide revenue from electric vehicles forecast to bring in $488.54 billion by 2030, Tesla stock needs an affordable vehicle to appeal to the masses.

Money Morning Technical Trading Specialist D.R. Barton is bullish on the Tesla stock price today and says it is "head and shoulders ahead in the electric car front."

Yet with the kind of volatility Tesla and global markets have experienced this year, TSLA stock is not for short-term investors. But for long-term investors looking to buy and hold a stock for five to 10 years, TSLA is an excellent choice.

On March 21, Argus Capital upgraded Tesla to "Buy" from "Hold" with a $333 price target. That would be another 34% gain from today's high for TSLA stock.