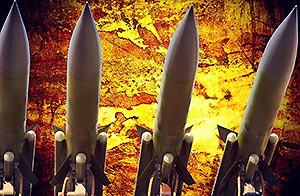 Noticeably absent, however, was mention of the POTUS' far-fetched plan to modernize the three legs of America's nuclear triad -- and the looming budget crisis that doing so will pose.

Independent estimates have projected an even more startling price tag...

They believe nuclear modernization in the United States could cost $1 trillion.

Here's a look at what makes President Obama's plan to update America's nuclear program unnecessary -- and how it could cost U.S. taxpayers up to a trillion dollars over time...

Each leg of the U.S. nuclear arsenal has unique capabilities.

For example, submarines are nearly undetectable and are packed with missiles that have multiple warheads. But the price tag of updating the Navy's 14 Ohio-class ballistic missile subs is projected to cost upwards of $139 billion dollars, reported The Fiscal Times on Jan. 5. The effort's lifetime cost will come in at roughly $347 billion.

This would devastate the Navy's shipbuilding budget, so Navy officials have been pleading with Congress to set up a separate "strategic deterrence fund," reported The Financial Times. They argue the ballistic missile submarine fleet is a "national" asset, not a service-specific one.

Congressional appropriators have resisted this move, however, because allowing such a fund to be set up would likewise set precedent for other parts of the nuclear program to make similar moves.

Which brings us to the second leg of the U.S. nuclear program: the bombers. These include the B-52, the new F-35 stealth fighter, and the future B-21 long-range bomber. Bombers all serve conventional arms but have the capacity to bear nuclear weapons as well. They're often seen as the most valuable leg of the arsenal because they are "recallable" should a president change his mind after deploying them.

Like with the Navy, the Air Force's budget could easily be devastated by the imposed modernization of the bomber fleet. The F-35 program alone already cost $400 billion dollars. And the warplane turned out to be a dud. It lacks maneuverability, its testing fell way behind schedule, and its software is still incomplete, reported The Daily Beast on March 17. More recently, military leaders revealed that the three versions of the F-35 jet aren't nearly as compatible as the military had promised they would be.

And then there's the third leg of America's nuclear program...

Land-based missiles - or intercontinental ballistic missiles (ICBMs) - are buried in 450 silos across the United States. The argument for ICBMs is that they can be launched in a half hour, which makes them the top choice should the United States need to respond rapidly in an attack.

But that rapid response is also what makes them the most useless. Once they're fired, there's no turning back. They are completely "un-recallable." So they just sit there. Former Defense Secretary William Perry told PBS Newshour on Feb. 24: "If you're going to blow up the whole world, what is the hurry? Why do you mind waiting another 20 minutes to do that? I don't see either the common sense or even the strategic argument for doing that."

Critics of the president's plan to modernize America's nuclear arsenal argue that updating the ICBMs would be a complete waste of money and that they should instead be phased out.

Controversial President: President Obama has governed a lot with his pen during his time in office, earning him the title of "Emperor Obama" as far as former House Speaker John Boehner is concerned. Here's what makes him the most controversial "executive action" user in U.S. history...