The Under Armour stock split date has been set for this Thursday, April 7. Through the split, Under Armour Inc. (NYSE: UA) will issue a new class of stock that will be distributed to investors via a 2-for-1 stock split.

Because of the Under Armour stock split, investors are now wondering if this is a good time to buy into UA stock. 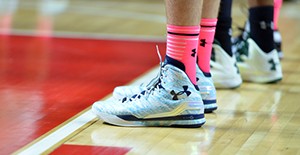 But before we get to that, here are the must-know facts ahead of the Under Armour stock split date...

A Maryland native and former special teams captain for the University of Maryland football team, Plank started Under Armour in 1996 in his grandmother's basement. He started the company with a prototype for a sweat-wicking compression shirt. His aim was to create workout and performance wear that was superior to cotton T-shirts.

Various class structures like Under Armour's have become more common. Nearly 7% of large-cap S&P 500 firms have dual- or multiple-class voting structures in place, according to the ISS QuickScore database.

When a company splits its shares, the market cap before and after the split remains the same. In short, shareholders own more shares, but each is valued at a lower price per share. However, a lower-priced stock on a per-share basis often attracts a wider range of buyers. That can end up boosting the share price.

The company doesn't plan to conduct another Class C split. But Under Armour said during its August 2015 shareholder meeting that there will be "lots more regular splits" in the future.

Under Armour stock has been an outperformer since its November 2005 IPO, when the company priced shares at $13. At a recent price of $84.47, Under Armour Class A shares are up 197% and 353% over the last three and five years, respectively.

The company is projected to post earnings per share of $0.05 when it reports Q1 2016 results on April 17 before the open. That would match EPS posted in the same quarter a year ago.

"I think [Under Armour stock] is going up," Barton said on his regular appearance on FOX Business. "I think they're going to get a great hit as the NBA season winds down. Steph Curry, the company's bell cow is really doing amazing things."

Using its current price/earnings ratio of 81.20, Under Armour stock has a $136 price target by December 2017. That's a more than 60% gain. Even accounting for the stock split, the percentage gain remains the same.

Under Armour trades at approximately 81 times earnings, which is high. But shares have always traded at a high multiple because of its history of impressive double-digit sales growth. And that enviable growth shows no signs of slowing down. By December 2017, Under Armour expects another double-digit year - at 25.5% sales growth.

You should buy the stock today before the split. It will go up to $50 in no time (which is $100 based on today's price). Buy today twice the shares you can afford then dump the UA.C shares tomorrow.