Since we last checked in on the price of gold, the precious metal has seen some violent swings.

Early last week, statements from the U.S. Federal Reserve pushed gold prices higher, but this boost only lasted about a day. The gold price retraced some of those gains shortly afterward and reacted to the movement in the U.S. dollar.

Despite its inconsistent performance last week, the price of gold's movement has huge implications for where it's headed in 2016. 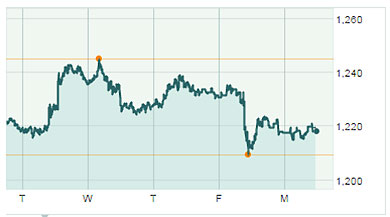 The gold price kicked off the week with two straight days of gains. It jumped 0.4% on Monday, March 28, to close at $1,221. On the following day, the price of gold rocketed higher thanks to dovish comments by Fed Chair Janet Yellen. Prices gained 1.7% to settle at $1,242.

But the tide turned on Wednesday, March 30, when traders sold gold in favor of buying stocks. Gold prices gradually tumbled 1.4% throughout the day to close at $1,224.

The last two days of the week were marked by volatility. Thanks to the U.S. Dollar Index hitting a five-month low, Thursday saw a turnaround in the gold price, which added 0.7% to close near $1,233. Despite falling 1% on Friday, the price of gold logged a modest weekly gain of 0.05%. 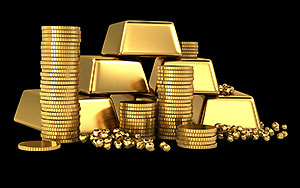 The big event for the gold price last week was the release of prepared remarks from Janet Yellen. On Tuesday, the Fed head gave a speech to the Economic Club of New York.

Essentially, Yellen told attendees that the pace of U.S. economic growth had weakened and tepid global economic growth could create headwinds. She also indicated the FOMC has no predetermined schedule for hiking interest rates but plans to proceed cautiously. She alluded to the central bank's approach to rate policy after the financial crisis and said the committee could repeat that approach to support the economy.

That lit a fire under both stocks and precious metals, and drove the strong gains we saw on Tuesday. The market interpreted Yellen's remarks as dovish for U.S. monetary policy, expecting an accommodative stance to prevail this year.

At the same time, Yellen's comments weighed on the U.S. dollar, which has been a thorn in the side of U.S. multinationals with huge overseas revenue. The U.S. Dollar Index logged a weekly loss of 1.7% last week.

This is sending a powerful message to the average citizen that their fiat money is actually worth less than 100% of its par value. Today, a huge proportion of sovereign bonds provide negative returns, so investing in these instruments is becoming less attractive.

People are also realizing central banks have no qualms about lowering their currencies to gain a temporary advantage over their trade partners.

Faced with all this, investors are increasingly turning to gold as a means of retaining purchasing power.

The 15% rise in the price of gold since the start of 2016 indicates more people are coming to that same conclusion every day.

Stay tuned to Money Morning for further updates and analysis on the price of gold – and how you can profit from it. Follow us on Facebook and Twitter.