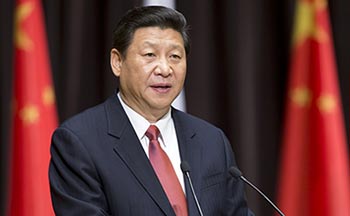 Family members of Chinese President Xi were named in the “Panama Papers” leak.

The leak of the Panama Papers shook the world last night. It appears, based on the 11 million documents exposed, that Mossack Fonseca - the world's fourth-largest law firm dealing with offshore jurisdiction and wealth management - operated with impunity for over four decades.

And several of the world's highest government officials were involved with the law-breaking firm to boot...

You see, Panama is a "tax haven" - a territory in which taxes are levied at extremely low rates or not at all. Law firms within these tax havens often are used to launder money, avoid sanctions, and evade taxes by the world's monied elite who don't want to pay higher taxes on their wealth.

The Panama Papers leak named financial arrangements of major global politicians and public figures around the globe. Some of those named include friends of Russian President Vladimir Putin, relatives of the prime ministers of Britain, Iceland, and Pakistan, the president of Ukraine, and relatives of Chinese President Xi Jinping.

Xi -- in particular -- is a major shock, given his own notorious stance on government corruption...

It is not illegal for Chinese citizens to set up offshore companies, noted the BBC earlier today. However, China's communist officials aren't supposed to use their titles for the sake of profit. And neither are their family members.

According to the Panama Papers, however, President Xi, as well as two members of China's elite Standing Committee, Zhang Gaoli and Liu Yunshan, all have in-laws listed as directors or shareholders in companies located in known tax havens.

You see, more than 300,000 party officials were punished last year in a brutal anti-corruption campaign -- which happened to be orchestrated by none other than President Xi himself...

According to The Telegraph on March 7, one individual prosecuted for taking bribes and amassing wealth beyond his means in September 2014 was sentenced to death.

And in fact, part of what elevated Xi to his position as president was his stance on anti-corruption. He said he would crack down on "tigers and flies," reported International Business Times on Jan. 15, meaning that he would focus both on high-level corruption as well as lower-level civil servants.

Now it appears the Red Dragon president may have been a tiger in disguise all along.


Panama Papers: The biggest leak in journalistic history was published by a German newspaper.

The Pope's Approach to China: Pope Francis wants the world to stop fearing Chinese growth and prosperity. This message is part of the pontiff's new "approach to China" - one of compassion and tolerance. But for China, repairing its association with the Vatican depends on other issues. Here's a look at the two nations' one-sided peace talk...