Welcome back, volatility. It was a brutal day on Wall Street, with banking stocks taking a hard shot in the chin. The Dow Jones Industrial Average fell more than 133 points, with Wells Fargo & Co. (NYSE: WFC) and Goldman Sachs Group Inc. (NYSE: GS) being the two largest drags on the index. Oil prices slumped again as traders are growing more pessimistic about the potential of a deal to freeze global production. 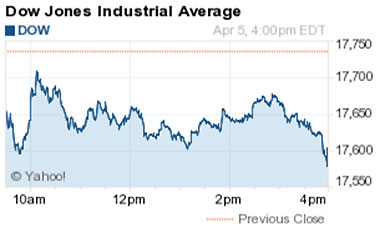 The U.S. Justice Department announced it will sue in order to stop the proposed merger of Halliburton Co. (NYSE: HAL) and Baker Hughes Inc. (NYSE: BHI). Shares of Baker Hughes fell by more than 5% after the government announced the plan to prevent the nation's second- and third-largest oil field services companies from joining together. The deal was announced in November 2014.

WTI crude oil prices were all over the place today as traders lowered expectations about a possible deal among OPEC and non-OPEC producers to freeze their oil output. A number of nations – representing up to 73% of global oil production – are set to meet on April 17 in Qatar to discuss global prices. However, Saudi Arabia – the largest producer in OPEC – said it will not participate unless its political rival Iran agrees to embrace the production freeze. WTI ended 0.5% higher and closed at $35.89.

On the economic front, International Monetary Fund (IMF) Managing Director Christine Lagarde raised concerns about increasing global economic risks. Her statements come a week after U.S. Federal Reserve Chair Janet Yellen downgraded expectations of interest rate hikes in 2016. Yellen said the Fed is likely to increase interest rates two times this year. However, CME FedWatch projects the central bank will go with just one rate hike, which is set at 50/50 odds for the month of June.

But the big talk today was about global taxes. President Barack Obama denounced American companies that are leaving the country in order to save money on taxes through so-called corporate inversions. The president said new rules set up by the U.S. Treasury Department will reduce the incentive to move abroad. Naturally, the government is attacking a symptom and not the root cause of why so many companies are shifting operations abroad: The U.S. corporate tax rate is the highest of all developed and advanced economies around the globe.

The deal could upend the planned $160 billion merger between Pfizer Inc. (NYSE: PFE) and Allergan Plc. (NYSE: AGN). Reuters reported Pfizer may abandon its plan to complete the merger; however, no final decision has been made. AGN stock cratered 14.8% on the news.

Most U.S. citizens don't realize there are shady nonprofit organizations that secretly invest massive amounts of money into elections. These organizations have special permissions that make them extremely dangerous to America's election process. In the video above, we uncover how these nonprofits buy elections right under the average voter's nose…