While this news would normally be a catalyst for the Twitter stock price to climb, Twitter already had a major stock price pop yesterday.

Yesterday, Twitter Inc. (NYSE: TWTR) opened at $16.00 and closed at $17.09 per share after Zacks Investment Research updated its recommendation on TWTR to a "Buy." That was a 6.81% gain in just one day, which is why investors aren't rushing out to add more shares of the social media stock today. 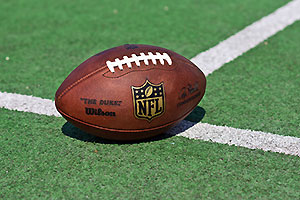 And even though the TWTR stock price is flat today, the NFL agreement is impressive. So does that make TWTR a great investment for long-term investors? Before we get to that, here are the details of Twitter's massive NFL agreement…

According to Bloomberg, the NFL knows more and more people are becoming "cord-cutters." In order to reach these people, the NFL sought a partnership with a technology company to stream its Thursday Night Football games over the Internet.

The NFL worked with Yahoo in the 2015 NFL season, where the first-ever livestreamed game was shared for free on Oct. 25. The Buffalo Bills played the Jacksonville Jaguars, and Yahoo reported 15.2 million unique viewers tuned in.

For Twitter, this move is consistent with Dorsey's vision for Twitter. In his 2015 Q4 earnings call, Dorsey said Twitter is all about live commentary, live conversations, and live connections.

Twitter failed to grow its 320 million monthly active users (MAUs) from Q3 to Q4, so Dorsey faces massive pressure to grow the user base. Steaming NFL games is a huge step in the right direction.

But there's a bigger-picture issue that could send the TWTR stock price plummeting even further from its 52-week high of $53.49…

Does the NFL News Make the TWTR Stock Price Attractive?

When Jack Dorsey became permanent CEO for the second time in October, his goal was to make Twitter easier to use.

His big push was "Moments," a feature that collects tweets Twitter employees feel are popular and shares them in one place. He also changed the "Favorite" button into a "Like" button with a heart that is similar to Facebook's new emoji reactions.

You see, Twitter makes the majority of its money from advertising revenue. While the social media site posted total revenue of $710 million for 2015, $641 million was from advertising.

That means Twitter makes over 90% of its money from ads.

If Dorsey isn't able to attract new users, advertisers will work with social media sites with larger followings. Facebook for instance has 1.59 billion MAUs, which Twitter will never catch up to. But even picture app Instagram surpassed Twitter users in September 2015 with over 400 million.

Snapchat is also rising in popularity, and analysts estimate it has over 200 million total users.

But even if Twitter beats Wall Street's expectations for Q1 2016, the TWTR stock price has a history of plummeting immediately following earnings.

Until Dorsey has proven he can add more users, Twitter doesn't deserve your investment capital.

The Bottom Line: The TWTR stock price is flat today after the social media site reached a deal to stream NFL games. While the news could be a catalyst for user growth, there is still no proof that CEO Jack Dorsey's initiatives are paying off. The Twitter stock price has plummeted 10% and 3% after its last two earnings reports, which makes TWTR a risky investment before its Q1 2016 earnings are announced.