With first-quarter earnings expected to be ugly, investors need to prepare themselves for a reawakening of the bear market that roiled stocks back in January.

Meanwhile, earnings estimates for Q1 kept falling, just as they have since December. That should have sustained the 2016 bear market, but it didn't.

Why the 2016 Bear Market Reversed 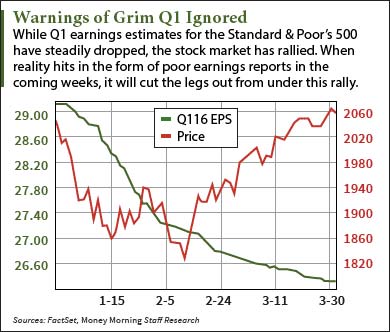 Instead of keeping an eye on the factor most responsible for driving stock prices - earnings - Wall Street instead has celebrated several bouts of further easing by the world's central banks. The U.S. Federal Reserve added to the festive mood by declining to raise interest rates in March.

"Investors may be celebrating now, but they will be mourning these policies later. The world remains on an unsustainable path of massive debt creation and slow growth that is going to end in tears," said Money Morning Global Credit Strategist Michael Lewitt.

Also fueling this rally is momentum buying - people who fear getting left behind as prices rise - and short covering.

But unsupported by fundamentals, what we have seen in recent weeks is actually a 2016 bear market rally.

It's just waiting for a catalyst to turn January's bear market loose again. And that catalyst will be the looming earnings season...

There's plenty of evidence that corporate profits are going in the wrong direction and have been for a while.

Last month, the U.S. Department of Commerce said that in the fourth quarter of 2015, corporate profits fell 11.5%, or the equivalent of nearly $245.2 billion, from the same period a year earlier. It was also a 7.79% drop from the third quarter.

And that's just the start. We've found numbers much more ominous - bad enough to virtually guarantee a bear market in the months ahead...

Why This "Bear Market Rally" Is Doomed

Last year, when earnings declined by 0.7% in Q2, FactSet predicted earnings growth would bottom out in Q3 and rebound in Q1 2016.

The 1.5% decline in Q3 wasn't as deep as expected, but foreshadowed more trouble ahead. According to FactSet's latest figures, the Q4 drop was 4.1%.

And at the moment, rather than the 5% rebound in Q1 earnings forecast in October, FactSet sees a sharp decline of 8.5%. It will be the fourth consecutive quarter of declines in earnings growth, which easily qualifies it as an earnings recession (only two consecutive quarters are required to meet the definition).

Earnings growth is expected to decline again in Q2, with growth now not projected to return until Q3 (at 2.5%), a far cry from the 14.7% growth that was forecast for Q3 2016 last October.

Likewise, revenue is expected to shrink 1.1% in Q1 - also a fifth straight quarter of year-over-year declines.

That's 78% of the companies offering negative guidance, the second-highest since FactSet started tracking this statistic in 2006.

And you can't blame it all on energy. While energy has the worst outlook by far (the Q1 forecast is for a decline of 101.8%), only two sectors out of 10 have positive Q1 earnings estimates.

This Earnings Recession Is Broad-Based

But the troubles with earnings run even deeper. JPMorgan Chase & Co. (NYSE: JPM) economist Jesse Edgerton has analyzed earnings from small, private companies not in the S&P 500. He found that 40% of the reduction in profits since Q4 2014 were from non-energy companies.

"The fact that firms outside the energy sector have seen only flat earnings despite a tailwind from low energy prices suggests that other factors are holding back their performance," Edgerton told Fortune.

"An optimistic analyst could have convinced himself there was nothing to worry about," Edgerton said.

How to Prepare for a Bear Market

With a bear market very likely, investors need to get their financial house in order.

"The recent rally is most likely a bear market rally that will reverse before long," Lewitt said. "For that reason, it is prudent to limit portfolios to only 20% equity exposure until valuations improve markedly."

Some insurance, in the form of gold, is also a good idea.

Lewitt also says investors should have another 10% to 20% in cash. Specifically, he suggests one-month or three-month Treasury bills.

"Remember that this is not an 'investment' but a sort of secure parking area," Lewitt said.

The Bottom Line: For many companies the upcoming earnings season will be ugly. Both analyst estimates and guidance from the companies have been moving lower for weeks. That portends badly for the recent stock market surge, which has the hallmarks of a bear market rally. When the poor numbers start to hit, the news will short-circuit the rally and return us to the bear market mood of January. So now is the time for investors to brace for a bear market by limiting exposure to stocks while loading up on gold and short-term Treasury bills.

Investors Beware: Michael Lewitt has been critical of this bear market rally for weeks now. In one of his most recent articles for Money Morning, he pinpoints the policy failures of Washington as well as the Fed that have made 2016 a dangerous time for investors. Here Lewitt explains what's really been going on with the markets this year...