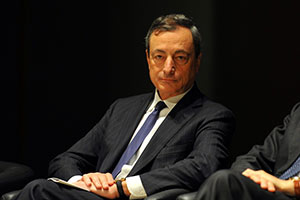 The ECB’s Mario Draghi attended the Shanghai Accord.

It even has a name: The "Shanghai Accord" conspiracy theory.

As it goes, the alleged Shanghai Accord was a side meeting of only a handful of economic policymakers (in Shanghai – hence the name) that took place concurrently with the G20 Summit on Feb. 26.

Attendees of the clandestine powwow included U.S. Federal Reserve Chair Janet Yellen, U.S. Secretary of the Treasury Jack Lew, Christine Lagarde from the IMF, Mario Draghi from the ECB, and central bank and finance ministry counterparts from China and Japan.

The chief reason for the Shanghai Accord was to allow these choice global policymakers a chance to plan the demise of the U.S. dollar.

That's right, Yellen and Lew are in on it.

Members of the Shanghai Accord want to keep the dollar down because, as the theorists surmise, a too-strong dollar sparks unwanted global market volatility. Plus it puts too much pressure on China, which is especially worrisome given the precarious state of the Chinese economy. Read: If the second-largest economy on the globe fails, the rest of the world goes down with it.

So the policymakers agreed that the greenback must be sacrificed, if only for a little while, for China's sake.

They supposedly mapped out a series of coordinated, well-timed actions to see their plot to kill the U.S. dollar through and through.

If the Shanghai Accord Really Does Exist – It's Working

It's important to know that central bank policy changes can work through expectations just as much they do through actions. Traditionally, a central bank "eases" by cutting rates or "tightens" by raising rates.

Attendees of the Shanghai Accord agreed that the yuan would need to be devalued. Doing so can boost a country's economy temporarily, though it wreaks havoc on its trading partners. Another outright devaluation of the yuan like the one that devastated markets on Aug. 27, 2015, was out of the question.

So their solution was to weaken the yuan on a relative basis.

This required strengthening the currencies of China's major trading partners, Japan and Europe.

You see, if the yen and euro got stronger, the yuan would still weaken, but without the shock of Chinese devaluation.

That's when Europe (and Japan) changed monetary policy expectations instead of raising interest rates in order to signal tightening.

And all they had to do was — you guessed it — nothing.

"Markets thought Draghi's ECB 'bazooka' would be long lasting. Markets expected Kuroda of the Bank of Japan to do more aggressive QE," reported Business Insider on March 28. "In fact, Draghi did the minimum necessary, and then said he was done doing more. Kuroda did nothing. Both decisions acted like tightening relative to expectations."

It worked. The euro and yen rose against the dollar, while the yuan went down without explicit devaluation by China.

Now it was up to the Fed to do its part to keep the dollar down where it needed to be. Enter Janet Yellen…

It wasn't a shocking statement. And given Yellen's history of dovishness, it wasn't even a surprising one.

But it's the subtle implication of it that really matters. She manipulated expectations. 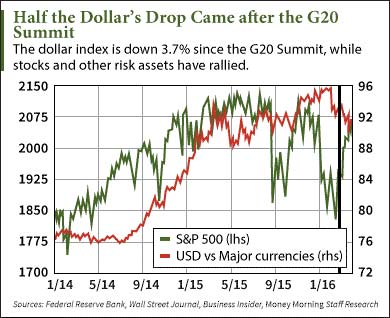 Sure enough, in response to Yellen's statements, the U.S. Dollar Index, which measures the greenback against a basket of six major currencies, hit a one-week low of $95.09 last Tuesday.

It wasn't a huge plummet for the dollar. It was more of an assurance to keep it in its lowly place for the time being.

Specifically, that lowly place has been around 3.7% lower on the index than where it sat just before the G20 meeting.

Is there merit in the Shanghai Accord rumors? Do you think the world central bank leaders have hashed out a plan to devalue the yuan and the dollar? Tell us on Twitter @moneymorning or like us on Facebook.