The Dow Jones Industrial Average has climbed 3.3% in the last month, but don't be fooled. The threat of a stock market crash in 2016 is still very real.

That's why Money Morning Global Credit Strategist Michael Lewitt has shared the best investment for those looking to protect their money from a 2016 stock market crash.

Before we get to his one simple investment, let's take a look at some of the stock market crash warnings we've seen… 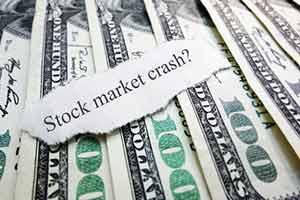 Investors are bracing for a dismal Q1 2016 earnings season, which will weigh on stocks.

Wall Street analysts expect Q1 2016 earnings to fall 8.5%, according to FactSet. That would mark the fourth consecutive quarter of contraction and the largest year-over-year decline since the Q3 2009, when earnings sank 16%.

Warning signs about this earnings season have been flashing for months. In March, The Wall Street Journal wrote that earnings estimates for Q1 2016 were falling at the quickest rate since the financial crisis. Last week, The Journal noted that 94 companies in the S&P 500 have issued earnings-per-share guidance below analyst consensus estimates. That's the second-highest level on record going back a decade.

Factors contributing to down earnings include a strong U.S. dollar, plunging oil prices, and a global economic slowdown.

Earnings played a crucial part during the first five years of the bull market. But earnings started decelerating in 2015, right around the same time the Fed started moving toward raising interest rates. Then stocks started underperforming. The S&P 500 logged a 0.7% decline last year.

On top of that, stocks still aren't considered "cheap," with an average valuation just under 17 times 2016 earnings.

When earnings reports start to roll in this month, don't be surprised if many disappoint. And that will end up having a major impact on the broader markets.

But investors don't have to get caught off guard by a pullback or even a stock market crash in 2016. Lewitt has picked out the one investment to protect yourself now…

The best investment to make ahead of a stock market crash, according to Lewitt, is cash. But that doesn't mean you should just be socking away cash – he has a better method.

His suggested portfolio consists of 10% to 20% cash. An equal amount is allotted to gold.  Lewitt recommends cash-like securities that are far safer than putting your money in the bank.

Lewitt's favorite "alternative" place to put cash is in one-month or three-month Treasury bills. Not T-bonds, not T-notes – T-bills.

"Remember that this is not an 'investment' but a sort of secure parking area," Lewitt explains.

You won't get rich off these investments, but they are super safe.

One-month and three-month T-bills are available in denominations of $1,000 up to $5 million.

"They're considered virtually risk-free, and they're also exempt from state and local income taxes (though still subject to federal tax)," Lewitt notes. "You buy them for less than the face value and then hold them until maturity, at which point you cash them in for the full value. So you might buy a $1,000 bill for $990 and then cash out for the full $1,000. If you cash out before maturity, obviously you don't get the full value."

There's no fee to open a TreasuryDirect account, and there's also no fee for individual investors to buy Treasury bills from TreasuryDirect. If you buy Treasuries on the securities market via a broker or dealer, however, you'll pay a commission and possibly a transaction fee.

On the day the bill matures, the proceeds are automatically deposited into your bank account using the banking information provided when you set up your account.

"But of course, the point of this exercise is that you DON'T want to put that money in the bank," Lewitt adds.

"So instead of 'cashing out' at the end of the one or three-month period, you set up your account to roll the proceeds over into buying a new bill of the same term and type for the next month (a process called reinvestment)," Lewitt continues. "You can schedule a reinvestment when you buy your initial bill, or you can wait until up to four days before it expires. And when you set up your account, you can schedule bills for reinvestment for up to two years."