When I started Total Wealth, I promised you that I would show you how to make money in all market conditions - both good and bad. And, as part of that, I told you I would help you find opportunity in companies that are going up... and down.

Today I want to keep that promise with a look at a gaming company that could be your most profitable short to date. That's not a statement I make lightly either, considering what we've accomplished so far.

In 2015, for example, I pinpointed a handful of companies ready to collapse and told you how to play them to the tune of some terrific double-digit profits even as other investors were left wondering what hit them. Examples include: 57.36% from Shake Shack Inc. (NYSE: SHAK), 35.75% from Zoe's Kitchen Inc. (NYSE: ZOES), 41.43% from Twitter Inc. (NYSE: TWTR), and 41.21% in just the last three months of 2015 alone as GoPro Inc. (NYSE: GPRO) went from hero to zero in the eyes of the investing public.

Now it's time to go after another overinflated, overvalued company. Only this time the potential could be even bigger because it's out of touch with the technological changes that threaten its existence.

Here's your most promising shorting opportunity of 2016 so far. 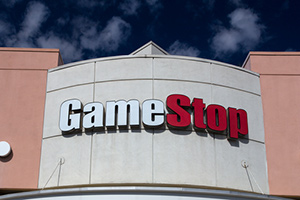 You may not be familiar with GameStop Corp. (NYSE: GME), but chances are your children or grandchildren are. It's an American video game, wireless services, and consumer electronics retailer with more than 4,000 locations across the United States.

Gamestop's big edge over other video game retailers has traditionally been something known as the omnichannel program, which gives video gamers the option of buying games online then rushing to the store to pick up their purchases in person rather than having to wait three days for shipping. That's kind of a head scratcher for most people given how we think about shipping versus traditional retailing, but for gamers it's been an important selling point.

In-store pickups are cratering even as they're being replaced by digital downloads in a never-ending cycle of "buy it now, get it now."

What's more, they're being replaced at a speed that people don't understand despite the fact the change is happening quite literally right in front of them. To give you an idea, digital sales totaled just 20% of all video game sales as recently as 2009. But two years ago, they eclipsed personal pickups for the first time and have never looked back.

And that's your opening.

Companies that react well to transformative times adjust rapidly to the new reality that their customers represent. Companies that don't will die.

The company got pummeled in 2014 with a series of failed menu items, poor management, and a CEO who was arguably completely out of touch with the dynamic changes facing him. Things were so bad that I actually removed MCD from my "buy list" for the first time in years.

Then, Uncle Ronald did the unthinkable and reversed course, revamped its menu, shut down stores strategically, and introduced new items catering to modern-day diners. Not surprisingly, its stock shot up 35% on reinvigorated sales in 2015. Once again, it makes a great investment.

But GameStop's CEO Paul Raines isn't taking the same approach as McDonald's CEO Steve Easterbrook did. In his company's Q4 2015 report, released just a few days ago, he touted his company's expansion of physical locations, which shouldn't be a priority to anyone focused on riding the digital revolution. Even more telling, he revealed that digital sales had increased just 9.7% year over year. In contrast, global digital sales for games jumped 11% last October alone.

The latest earnings numbers suggest to me that GameStop is paying the price for its failure to adjust to a new market. The company's quarterly revenue growth has actually declined by 3.6% year over year, which is particularly dire when you consider GameStop has managed to shrink its revenue in the middle of a $111 billion gaming boom.

You could make the argument that the company is in transition like many analysts are. However, don't forget that transitions require cash, and GameStop doesn't have a lot that on hand. In fact, the company has only $186 million versus $350.9 million debt, according to Yahoo! Finance.

The situation reminds me of BlackBerry Ltd. (Nasdaq: BBRY).

That company found itself in a similar situation in early 2011 to where GameStop is today. It was up 20% for the year and had beaten the overall markets by a factor of three to one.

Like GameStop today, BlackBerry could also boast of impressive-sounding growth in certain segments. The company's smartphone shipments had grown 43% over fiscal year 2010, and it was the number one smartphone supplier for the United States, UK, Latin America, and Canada at the time.

But it was little more than a sunset glow. Over the next 18 months, BlackBerry's stock would fall 81% as it ceded ground to more innovative rivals like Apple and even Samsung.

Today, BlackBerry commands just 3% market share of the smartphone sector, and it's a cautionary tale of a once-great company that was undone by greed, avarice, and simply being on the wrong side of an "Unstoppable Trend" like technology.

Barring a massive change in thinking by key executives, I don't think GameStop can stay in the game.

Editor's Note: Keith expects strategic shorts like GME to continue to turn troubled markets into quick double-digit profits - but that doesn't mean there aren't plenty of promising buys for investors savvy enough to spot them. In particular, he's got his eye on a small-cap robotics company that doubled within six weeks of him recommending it to Total Wealth members - and by his calculations, its stock price surge is just beginning. For a full and free report, including ticker symbol, sign up for Keith's free investment newsletter here.

great article on the Anti-Inversion law and how it affected PFE. What do we do with PFE now?

This drug royalty program, doen't a company named Ligand do this also? Or is it the same one.