But there's one upcoming IPO that will have a lasting effect on the inactive IPO market. That's because this deal is set to become the largest stock offering in history.

Before we discuss this $2 trillion company, here's what you need to know about the 2016 IPO market – and why it's at the lowest levels since the financial crisis…

The Lackluster IPO Market Will Be Saved by This Upcoming IPO 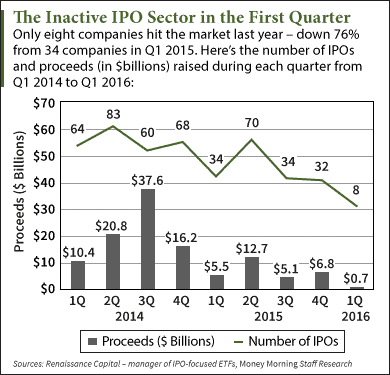 According to Renaissance Capital, a manager of IPO-focused ETFs, the eight IPOs during the first quarter raised only $700 million in proceeds.

That's an 87% decline from the $5.5 billion worth of proceeds raised during the first quarter last year. It was also the least active quarter for IPOs since Q1 2009, which saw only one deal – Mead Johnson Nutrition Co. (NYSE: MJN) – raise about $700 million.

But the upcoming IPO calendar will pick up this quarter as several "icebreakers" – strong, high-growth companies – go public and bring the market back to life. These firms include BATS Global Markets Inc. and SoulCycle Inc., the latter of which saw revenue jump 49% to $112 million from 2013 to 2014. It also earned $8 million in profit during Q1 2015 and expects to raise up to $100 million in proceeds.

Still, these icebreakers pale in comparison to this upcoming IPO. In fact, the firm we're focused on is estimated to be worth up to $2 trillion. That makes it by far the most valuable company in the world.

This Upcoming IPO Will Become the Biggest Stock Offering Ever 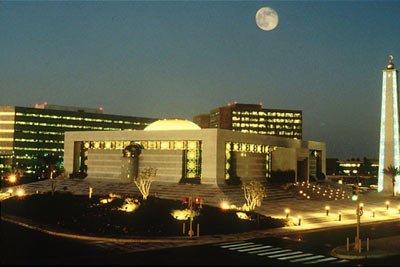 The upcoming IPO we're talking about is Saudi Aramco – Saudi Arabia's state-owned oil behemoth and also one of the most valuable firms in the world.

Back in January, The Economist reported a Saudi Aramco IPO was being considered by the Saudi government. The energy colossus known for concealing its financial information from the public had announced it was planning to sell a small stake to the public.

And on April 1, the Saudi Deputy Crown Prince confirmed the Kingdom is pushing for an IPO date in 2017. According to his interview with Bloomberg, the government will sell a 5% stake of the company to public investors.

Officially known as the Saudi Arabian Oil Co., Aramco has ruled the global oil industry for over 70 years. It supplies more than 10% of the world's oil every day. One of the few financial details the company discloses is its crude oil reserves – 261.1 billion barrels. That towers over the 24.8 billion barrels owned in 2015 by Exxon Mobil Corp. (NYSE: XOM) – the world's largest independent energy company.

A Saudi Aramco IPO of even a small slice of the company will become the largest IPO of all time. After all, analysts estimate Saudi Aramco would command a $2 trillion market cap after going public. That's twice as much as all seven Big Oil companies combined.

Allowing the public to invest in its crown jewel would be unlike anything Saudi Arabia has done before.

"This marks a huge change in Saudi strategy," Money Morning Global Energy Strategist Dr. Kent Moors – a 40-year oil industry veteran and advisor to U.S. and Russian energy agencies – told Oil & Energy Investor readers on April 2. "The kingdom has been reluctant to sell parts of Saudi Aramco, because doing so requires revealing information about Saudi oil fields that have been kept secret until now."

The Bottom Line: The IPO market hasn't been this dead since the depths of the Great Recession in 2009. That's all about to change thanks partly to the IPO "icebreakers" but largely to the unprecedented heft of Saudi Aramco. With its $2 trillion market cap and dominance of the global oil market, Aramco will become the largest IPO ever and renew interest in the massive profit potential of the IPO market.

Alex McGuire is an associate editor for Money Morning who writes about upcoming IPOs. Follow him on Twitter for the biggest IPO calendar updates.

Saudi Aramco Isn't the Only Deal to Watch This Year… As the IPO market picks back up, a number of massive deals will come down the pipeline and offer huge returns for savvy investors. That's why we've gathered a list of the 5 most important IPOs to watch in 2016…

So what is the IPO?

you probably know by now that it means initial public offering

What about the ipo coming called Kadmon?