Stocks continue to experience a rough start to April, with the Dow Jones Industrial Average falling more than 174 points today (Thursday). Shares of Apple Inc. (Nasdaq: AAPL) were the largest weight on S&P 500 and the Nasdaq, while shares of Goldman Sachs Group Inc. (NYSE: GS) hit the Dow Jones hardest. Investors remain concerned about global growth and the sanity of global central banks' monetary policy efforts. The S&P 500 erased its gains for the year.

Here's what you need to know about the markets on Thursday, April 7, 2016. 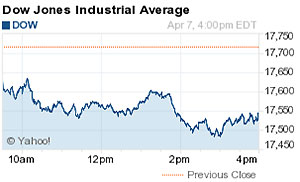 We've officially entered a new earnings season, and this quarter is expected to be one of the toughest for U.S. companies in years. That said, there are plenty of ways to make money. As Money Morning Options Specialist Tom Gentile explains, it all starts with understanding how earnings reports drive the markets. Some traders might tell you that earnings season means nothing in the broader scheme of things. But if you're an options trader, that couldn't be further from the truth. Get started and make money, right now.

On the economic front, pay attention to weekly jobless claims and two events featuring prominent members of the U.S. central bank, including Fed Chair Janet Yellen. Jobless claims have remained quite low in recent months, a positive sign for the labor market. Meanwhile, Yellen is expected to take part in a conversation with other former Fed chairs – Ben Bernanke, Alan Greenspan, and Paul Volcker.

A new fiduciary rule released by the U.S. Department of Labor is causing a stir with investors. U.S. President Barack Obama tasked the DOL with creating a rule set to go into effect on Jan. 1, 2018. The new standard applies to financial advisors of retirement accounts, including individual accounts, and mandates that they always act in the best interest of their clients. While this may sound like a positive development for investors like you, there are a few hidden traps and consequences of such a broad rule on retirement investors. Here's how the law came to be and the inevitable ways that it can impact your retirement.

But the big talk today was happening at the U.S. Treasury Department. Following the agency's new rules aimed at preventing tax inversions – a deal where a firm relocates its headquarters abroad through a deal in order to avoid the American corporate tax code – Secretary Jack Lew has a new target: shell companies. The federal agency's new rules specifically target husk companies that don't have active operations or major resources but rely on a tax loophole that allows firms to hide their identities and reduce their financial burden. The new rules forced pharmaceutical giant Pfizer Inc. (NYSE: PFE) to walk away from a $160 billion deal with Allergan Plc. (NYSE: AGN). Calling off the deal has cost several banks hundreds of millions of dollars in fees.