In our last report, we shared the shocking way ISIS makes most of its money -- it's not from oil and gas, which only account for roughly a quarter of the group's income.

Yes, the terrorist group operates much like a big business.

But what you may not know is how eerily similar "ISIS Corporation" operations are to those of an oil company... 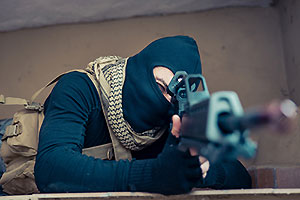 As we mentioned, oil isn't the biggest way ISIS makes money. Still, U.S. Treasury Department officials believe the terrorist organization earns up to $500 million a year selling oil on the black market. U.S. and coalition planes have bombed ISIS-controlled oil refineries in Syria since 2014 as part of a plan to cut into ISIS' revenue source for funding terrorism.

Of course, ISIS isn't the only "organization" losing money from oil...

And even though Exxon Mobil Corp.'s (NYSE: XOM) latest earnings report was its weakest in over a decade, the company has avoided cutting jobs (thus far). But it will slash its spending on gas terminals, rig leases, and other projects by 25%, according to Fortune.

According to a leaked document, ISIS is following in the footsteps of these oil giants when it comes to operational expenses...

Terrorist groups are seemingly disorganized, but not ISIS. Its balance sheets look just like those of an oil company.

The terrorist organization has a column for income, a column for expenditures, and higher up "management" is copied on the pertinent financial information, according to NPR.

Even more surprising, ISIS' budget is in U.S. dollars.

But since ISIS is a terrorist organization that depends on its fighters, it can't cut jobs like oil companies.

Instead, ISIS is saving money by reducing the pay of its workers...

According to the Congressional Research Service, ISIS soldiers used to earn between $400 and $1,200 a month. They can also earn a $50 stipend for their wives and $25 for each child. Now, some ISIS workers are reportedly earning $200 a month.

Of course, the salary cuts have allegedly created resentment. According to the Syrian Observatory for Human Rights, the cuts were directed primarily at fighters in the city of Al-Raqqa. That's the de facto base of the Islamic State.

Syrian militants reportedly believe their salaries have been cut in half to order to increase foreign fighters' salaries. ISIS maintains these salary cuts are universal, though, no matter a person's position within the terrorist organization.