Gold prices today are mostly flat, a change from the volatility we've been experiencing throughout 2016.

And we've continued to see that same type of volatility in the price of gold this week. Overall though, we've experienced continued strength in the beginning of April.

And now, commercial traders have a large influence on gold futures prices. Their recent extreme position is one that's worth noting, as it may be a sign of near-term weakness before gold resumes its climb higher. 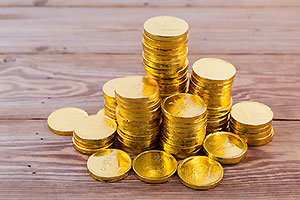 But before we get to that long-term gold price outlook, here's how gold prices have trended this week…

That's when the price of gold went on a short-term rally. By the end of the day Tuesday, the spot gold price had rallied all the way to $1,231.

By Wednesday, gold had weakened again to open at $1,219, and after bouncing around closed only slightly higher at $1,222. That was despite the minute release from the U.S. Federal Reserve's March meeting. Those minutes revealed that Fed members felt no urgency to raise rates in April, and that had almost no impact on the gold price.

Thursday saw renewed upward momentum as gold prices surged in early morning trading to open at $1,238 and continued a bit higher to reach $1,241 by midday. Gold prices today remain in that same range.

Now that we've looked at this week's gold price movement, here's the "behind-the-gold-scenes" activity that shows what we can expect from the gold price today and in the coming weeks…

What's Next for Gold Prices in Q2

In Q1, gold prices enjoyed their best quarter in 30 years after rallying 16.5%. That's significant and will draw a lot of attention – and a lot of new investors.

The gold rally in 2016 is particularly impressive because the precious metal has outperformed the broader markets, bond markets, and even other commodity indices.

Recent performance is one thing. But when we look forward, one of the most influential factors affecting the gold price tends to be the extreme positions in the futures markets.

More specifically, what's most relevant to watch is what commercial traders are doing. I'm talking about weekly Commitment of Traders (COT) reports.

You see, outsized positions in these tend to mark turning points in the gold price.  Within COT reports, commercial traders are considered the smart money because they typically have a hefty long-term stake in gold. So they use futures to hedge themselves.

They typically short the metal since they're protecting against future price declines. When gold's been strong and commercial traders are expecting near-term weakness, their short interest in gold futures tend to pile up. When that total reaches above 150,000 contracts, it's time to pay attention.

As of April 1, commercial traders on the Comex held their largest short position ever on that exchange, a total of 207,900 contracts.

That signals increased odds that gold will see a pullback in the near term.

So if you've been looking to buy, your chance to load up at better prices could be just around the corner. The gold price today is flat and may head lower in the short term. Take that as an excellent buying opportunity.