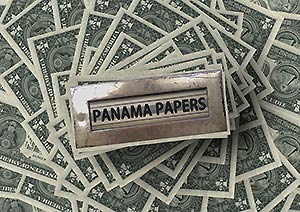 Sunday's Panama Papers leak rocked the world. Eleven-and-a-half million confidential documents connected some of the richest, most prominent people on the planet to hidden assets in shell companies. Top politicians and members of the social elite from Iceland to Britain to Argentina to Russia saw their names tarnished overnight.

But one prominent group of corporations and wealthy tycoons was noticeably missing from the leak...

Sure, there were a few U.S. citizens mentioned in the Panama Papers leak - most notably Hollywood mogul and record producer David Geffen - but there were no big American names comparable to the likes of British Prime Minister David Cameron or Chinese President Xi Jinping.

A major reason for this noted absence is that Americans don't have to go abroad to places like Panama or Switzerland to hide funds and activities behind anonymous corporations.

They can use lucrative tax loopholes right here at home.

That's right, the United States is a tax haven...

In 2014, 90 countries around the world signed an information-sharing agreement set up by the Organization for Economic Cooperation and Development. The United States couldn't agree to the terms and so our government never signed. Feds cited the fact that U.S. banks don't collect the kind of information foreign countries would need to identify tax dodgers in the first place.

That's an ironic tidbit given the 2010 passing of the Foreign Account Tax Compliance Act, or FATCA. The act requires financial firms to disclose foreign accounts held by U.S. citizens and report them to the IRS or face steep penalties.

It seems that while Washington may deride foreign countries for helping rich Americans evade taxes by hiding their money offshore, it's allowing its own banks to hide the riches of the international moneyed elite all over the heartland.

Here's a look at how each of the four have become popular among global tax evaders, even prompting one of the world's biggest providers of offshore trusts to move dozens of accounts from Switzerland to good ol' Sioux Falls, South Dakota...

First, it's important to know that, technically, there's nothing illegal about banks luring foreign investors to put money in the United States with promises of confidentiality... so long as they are not intentionally helping to evade taxes abroad.

But that just boils down, in practice, to foreign investors' simple denial and "no questions asked" policy on bankers' part.

In fact, the United States is one of the few places left where advisers are actively promoting accounts that will remain secret from overseas authorities, reported Bloomberg on Jan. 26.

In 2012, a group of researchers from the University of Texas, Brigham Young University, and Griffith impersonated both low- and high-risk (potential money launderers, terrorist financiers, corrupt officials) customers trying to set up a shell company. They solicited more than 3,700 corporate service providers for their study, which eventually found that the United States had the laxest regulations incorporating anonymous businesses worldwide... with the exception of Kenya.

The researchers also found that notorious tax havens such as the Cayman Islands and the Bahamas were far less permissive in offering shell companies than these states:

You see, the states compete with each other to make it easier to set up corporations with very few questions.

Here's what they offer...

Nevada makes it easy to incorporate secretly and charges only a quaint $500 annual business license fee for corporations and $200 for other businesses. Furthermore, lawmakers granted business entities greater protection against lawsuits in 2001, hoping to attract more of them and use incorporation filing revenue to raise teacher salaries.

It's in Reno, Nevada, that Rothschild -- the centuries-old European financial institution -- set up shop. The firm is now moving the fortunes of wealthy foreign clients out of offshore havens such as Bermuda and the Cayman Islands because they're subject to the new FATCA disclosure requirements. These clients now have Rothschild trusts in Reno.

For some, Wyoming offers even more advantages than Nevada because it offers all the perks the Silver State does plus allows for what is called a "lifetime proxy." A proxy is someone who votes on a company owner's behalf.

This opens the door to a common asset protection strategy in which a business owner can hide his identity by having someone else hold his stock (or membership shares) while still maintaining ownership control.

The Mount Rushmore State is viewed as favorable for tax evaders because it doesn't impose tax on assets held in trust and allows the entire court file to be sealed permanently with one simple petition.

Trident Trust Co., one of the world's biggest providers of offshore trusts, moved dozens of accounts out of Switzerland, Grand Cayman, and other locales and into Sioux Falls, South Dakota, in December 2015 -- just ahead of FATCA's Jan. 1 disclosure deadline.

Let's not forget about little Delaware. The state prides itself on being the incorporation capital of the United States.

"More than 1,000,000 business entities have made Delaware their legal home," claims Delaware's Division of Corporations website. "More than 50% of all publicly traded companies in the U.S., including 64% of the Fortune 500, have chosen Delaware as their legal home."

You see, the First State allows companies to lower their taxes in another state -- for instance, the state in which they actually have their headquarters -- by shifting royalties and similar revenue to holding companies in Delaware, where they are not taxed. In tax circles, the arrangement is known as "the Delaware loophole."

Saudi Arabia's Black Hole Budget Deficit: With Saudi Arabia debt expected to reach $87 billion this year and crude oil prices hovering below $37, the Kingdom needs an immediate solution. According to the International Monetary Fund (IMF), the country is on track to be completely broke by 2021. That's why the country is developing this $100 billion-a-year plan to restructure its economy...