What happens next to homebuilders depends on whether the trends that lifted both prices and sales since 2009 are about to hit a wall.

The wider housing sector itself could be headed for trouble.

That's looking increasingly likely, but we're not quite there yet. Here's what you need to know about the stocks in this absolutely critical sector - and how to profit when it goes over the edge.

Housing Trends Are Running Out of Steam

Rising prices have been key to housing's recovery and last year saw more of the same. 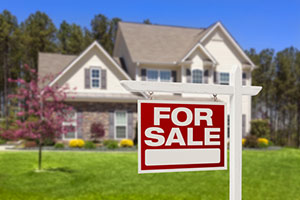 Sales of existing homes, which account for upwards of 90% of all housing sales, rose 7.7% in 2015, according to the National Association of Realtors. In fact, NAR economist Lawrence Yun said it was the best year since 2006.

Through December 2015, sales of existing homes increased for 46 consecutive months.

But now the trends backing rising home prices and rising sales could start to hit a wall.

First, interest rates, which have been kept at record lows for a record number of years and have been a driving force in housing's recovery, look to be heading higher - eventually.

In the middle of December 2015, the U.S. Federal Reserve raised rates for the first time since 2006.

Economists, expecting a slowdown because of the Fed's rate hike, had been forecasting a gentler 2.6% decline.

On the heels of institutional investment funds buying millions of homes as the housing recovery took off, helping to lift prices, homeowners themselves have been keeping to the sidelines, hoping further appreciation will float their often-underwater assets higher.

The inventory of existing homes for sale is currently down to 4.4 months. During more "normal" times, most markets have enough homes for sale that it would take six months to sell them.

And that's if people can afford to buy them...

Homes Are Slipping Out of Reach for Strapped Americans

Fewer homes for sale around the country forces buyers to pay up (and up) for what's available.

Now, on top of rising prices and possible interest rate increases, economists are pointing to slow wage growth and first-time buyers being increasingly priced out of the market as a caution sign for housing.

While wage growth is showing a pickup, the Labor Department's March numbers only had a .3% increase in wage growth from February and a one-year increase of just 2%.

According to the National Association of Realtors, "qualifying income" (the minimum gross income necessary to afford the median-priced home in the United States with a down payment of 20% and the requirement that gross housing expenses not exceed 25% of gross income) increased by $3,400 from January 2015 to January 2016.

With house prices forecast to rise further, albeit at a more moderate pace than they've risen since 2009, more and more households will face an affordability pinch.

Another headwind for housing's continued robust recovery is the drop-off in household formations.

According to Freddie Mac, during the Great Recession, household formation rates dropped and still have not picked up to match underlying population growth. The giant government-sponsored enterprise that facilitates mortgage availability and affordability reported in a March outlook piece that "throughout the first half of 2015, the pace of formations seemed to be accelerating, reaching 2.2 million on a year-over-year basis in the second quarter of 2015. In the latter half of 2015, the pace of net household formations dropped by over 50% to 800,000 per year."

The outlook goes on to say that "the drop-off in household formations could be an anomaly due to noisy data, or it could be a symptom of the lack of supply of housing. Total annual housing completions have been running below 1 million for several years, and the vacancy rates are dropping. With low levels of supply there is nowhere for households to be formed. So despite robust job gains, household formations haven't followed yet."

And that brings us to the homebuilders - where investors could start to feel the heat.

These Shares Are Freakishly Underwhelming

None of the big publicly traded homebuilders have done well lately.

With rising home prices, rising sales, and low inventory levels driving both prices and sales higher, you'd expect the homebuilders' stocks to be performing over the past few years...

But they haven't done anything. In fact, as the housing market's been enjoying a good recovery, homebuilder's stocks have been going nowhere, and it gets worse.

Lennar Corp. (NYSE: LEN) just reported better than expected quarterly earnings, and its stock got a lift from the news. But after a steady rise since 2011, Lennar slipped badly in early 2016 and broke its long up-trending support line.

The stock's now above $47, but it really has to get above $50 to have any chance of going higher.

Besides, even if it does get above $50, unless the headwinds now facing housing's continuing robust recovery get overrun, Lennar can probably only get back to its 52-week high of $56.

Lennar is not alone in the doldrums.

KB Home's (NYSE: KBH) stock peaked way back in the spring of 2013 at $25 and has been going downhill ever since. The stock's now at $14.10, and if the most important spring selling season is better than expected, the stock might struggle back to its 52-week high of $17.42. But above that, it looks like the stock's facing a ceiling.

And Toll Brothers Inc. (NYSE: TOL), the high-end homebuilder, hasn't fared any better. After a steep rise from 2011 to the spring of 2013, Toll Brothers has gone nowhere but sideways. That is until 2016, when it experienced a mini-dumping. The stock's now got to make a 17% up-move just to get back to the middle of its sideways, going-nowhere level.

Now, given those stiff headwinds I told you about, it's unlikely the homebuilders can increase sales and margins in the new abnormal economy.

If you own any of the homebuilders' stocks, it makes sense to see if the usually hot spring selling season can produce good second-quarter earnings, and if not, it's time to get out of the way of the homebuilders' stocks, in case they fall into their own basements.
Now, these are all "yellow lights" - we're not flashing red yet. Homebuilders should definitely be avoided, but I'm concerned about housing in general. There's a lot riding on its success. So right now, I'm tracking several opportunities to short housing and make a lot of money if those yellow lights turn bright red.

So I'll be back in touch to tell you about the best of those opportunities when the time is right.

Shah wants you to be ready for this trade at 9:30 a.m. tomorrow. This week's market conditions are creating the single most lucrative trading opportunity of the last 87 years. Shah's been showing his readers a unique strategy that he calls "the volatility trade" to score huge triple-digit winners over the past 30 days. But he anticipates his next opportunity to be even bigger. Click here for details.

will US difficulties cross the pond to the UK?