But of the more than $1 trillion in auto loans outstanding, Experian estimates that between $205 billion and $388 billion are subprime loans, with 15% to 20% of those loans securitized.

Now, when you consider that U.S. subprime mortgages outstanding in 2007 were $1.3 trillion (based on Ben Bernanke's remarks from May 2007), and mortgage-backed securities and MBS derivatives based on those subprime loans outstanding probably totaled another $2 trillion to $4 trillion, subprime auto loans don't come close to the depth and breadth of subprime mortgages back in the day.

Still... when the subprime auto bubble pops, it's going to be messy - and smart traders are going to have the opportunity profit... if they know where to look.

Today, I'm going to break down the growing subprime auto loan bubble, including how we got here and where I think we're headed.

The Securitization of Subprime Auto Loans 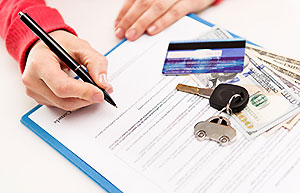 The mortgage meltdown that triggered the Great Recession started with late payments, and right now subprime auto loans are starting to head down the same road.

According to Fitch Ratings, the 60-day delinquency rate (loans at least 60 days past due) on an index of securitized subprime auto loans just hit 5.16%. That's more than during the Great Recession and the highest level since 1996.

Net losses on securitized subprime auto loans are 7.5%, based on S&P data.

The market for subprime auto loans is big and getting bigger every day because more players are getting into the business.

Companies that specialize in subprime lending like OneMain Holdings in Evansville, Ind., and Avant, a Chicago-based online lender who has generated $2.8 billion in unsecured personal loans since 2012 and jumped into the auto lending game, are all the rage.

Sheila Bair, the former head of the FDIC from 2006 to 2011, just joined Avant's board, citing her long-held desire to make credit more widely available. But that, of course, is another story for another time.

The reason it's so easy and lucrative for so many upstarts to get into the business and grow is that most of the loans they make are being securitized and sold off to investors.

As proof of the rapid growth of the securitization of subprime auto loans, Exeter Finance, which securitizes loans and markets them and is now the third-largest issuer of subprime auto bonds, grew its portfolio from $150 million three years ago to over $2.8 billion today.

It's a profitable business all around... but it's not sustainable. That's thanks to increasingly questionable lending practices brought about by increased competition.

It's Only Going to Get Worse

Lenders not only finance new and used cars, they finance everything from down-payments and warranties to undercoating. And believe it or not, they are now offering "cash out" refinancing.

And because the game is so lucrative, increasing competition is lowering standards and making lenders stretch further and further out on the "bad borrowers" tree to find takers of their high interest rate loans.

You know this going to end badly.

Lenders typically charge between 9% and 36% interest, with 9% being pretty rare.

For comparison purposes, the average 60-month new car loan to prime borrowers is 4.05%.

The average loan term on subprime auto loans is 72 months.

While longer terms make monthly payments smaller, there's a problem with depreciation of the underlying asset while the loan's outstanding.

It's just an accident waiting to happen...

One Way to Profit from the Subprime Auto Bubble

As I said, subprime auto loans imploding won't have the same impact that subprime mortgages had on the global economy. So you don't have to worry about betting on the world tumbling into another Great Recession.

That said, there aren't a lot of ways to make money on rising defaults on subprime auto loans - as of right now, banks aren't lining up to take the other side of derivative short trades.

But there is one trade that makes a lot of sense right now and can make you some good money when the bubble finally bursts.

SC is a stock you want to short.

They're already bleeding. SC just delayed its 10-K filing twice because it was forced by securities regulators to restate three years' worth of earnings because they didn't properly account for "material weaknesses" in their loan book.

Presumably by accident, SC did not adequately provision for bad loans, which funnily enough, were worse than they knew. After adjusting "troubled debt restructurings," Santander Consumer's fourth quarter 2015 profits were knocked all the way down to $12 million... from a previously trumpeted $67.7 million.

That's bad... but believe it or not, it gets even worse.

What I find really disturbing is that in spite of that "correction," when the company restated earnings for all of 2014 and all of 2015, profits were only adjusted down 5% each year.

Something's not right there.

And, as far as guidance, the company just said in January that 2016 would be a tougher year on account of increasing competition.

Now I think you get it. This whole subprime auto merry-go-round is eventually going to throw a lot of riders off their painted ponies.

If you want to bet on the crash of the subprime auto loan game, I like shorting Santander Consumer USA Holdings at the market.

Use a tight stop if you want. But I'm going to short more on any big jumps in the stock.

One Trade to Profit from P2P Lending's Latest Headwind: P2P lenders have seen their stock prices get pummeled by various market forces. And with the SCOTUS now mulling a case that could represent a landmark in financing, things could soon get much worse...

Everyone who watched the Big Short is now an expert on bubbles but few have the facts to back it up.

You can google articles from the likes of Experian, Equifax and Dealertrack where they lay out the facts and why the subprime market in auto does not approximate the one in housing. First big question to ask oneself it so ask why we saw no bubble burst in subprime auto during the 2007/8 credit crisis when capital dried up to lenders, often the worst thing you can do to a shaky loan book.

Instead, even as subprime housing melted down, subprime auto continued to do well under the worst possible circumstances. That, despite the fact the loan volumes then were greater than what they are now.

A car is not a mortgage. The key factor contributing to the mortgage collapse was the belief housing prices (the underlying asset) would forever go up. Thus no need to ever pay down the loan and in fact borrow more to the max. There is no such belief in auto. Another key factor is that while people may walk away from a home they typically hang onto their car. Making auto loans one of the highest performing asset classes when it comes to lack of defaults. To put in an indelicate way 'you can live in your car but not drive your house' and when jobs are lost people may move away but they need their car to do so.

And lastly is jobs data. With the US job data looking extremely positive for the foreseeable future what would be the trigger for default. In mortgages it was the spike in carrying costs as teaser rates expired and re-financing was not possible due to property valuations not moving up as expected. Again no such dynamic at play in auto. If the person can afford the loan at inception and their job situation is secure and improving there is no reason to believe they will simply default.

Looking at the stock price of SAN from April to now, it looks like you were flat out wrong.

The fact is that auto loan defaults have risen dramatically this past year. Santander's stock has dropped a good bit too.

My question is, absent of a variable interest rate, what catalyst is there to cause a mass number of people to default on their auto loans?

Thanks for these tips for The Subprime Auto Loan Market Is About to Collapse. Really a great thank to you for the knowledgable blog.