Now that Under Armour Inc. (NYSE:UA) has finally completed its third stock split in as many years, investors are asking us where the Under Armour stock price is headed in 2016.

But before we get to our outlook for UA stock, here's what investors need to know about the Under Armour stock split… 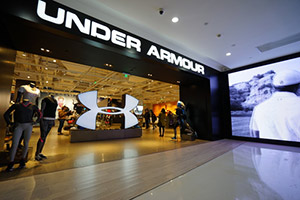 When a company splits its shares, the market cap before and after the split remains the same. Shareholders own more shares, but each is valued at a lower price per share. However, a lower-priced stock on a per-share basis often attracts a wider range of buyers, which can boost the stock price.

The Under Armour stock price was down slightly in morning trading today, about 3.8%.

The UA stock price has soared since the Baltimore sports apparel firm made its debut as a publicly traded company on Nov. 18, 2005, at $13 per share. Over the last three and five years, the Under Armour stock price is up 201.68% and 381.62%, respectively.

Today's split, which took effect after yesterday's close, includes a new class of shares. All stockholders of record of Class A and Class B shares on March 28 received a new Class C shares on a 1-for-1 basis. That has the same effect as a 2-for-1 split.

The new Class C shares don't give holders the power to vote on board elections, company resolutions, or other matters. The split was structured in a way that ensures CEO and founder Kevin Plank retains control of the company.

Plank owns all the Class B shares, which have 10 times as much voting power as Class A shares. As of Sept. 30, Plank owned approximately 16.6% of the total Class A and Class B outstanding stock and roughly 66.5% of the voting power.

Various class structures like Under Armour's, although controversial, have become more common. Nearly 7% of large-cap S&P 500 firms have dual or multiple-class voting structures in place, according to the ISS QuickScore database.

Is the Under Armour Stock Price Heading Higher in 2016?

But let's take a look at the bigger picture…

At the Consumer Electronics Show in January, Under Armour unveiled a Connected Fitness products portfolio with strategic partnerships with HTC and Harman. Devices include the $400 HealthBox, featuring the UA Band, UA Scale, and UA Heart Rate. The Under Armour "smart shoe" debuted on Feb. 29. Two models of wireless headphones have also been introduced.

Money Morning Technical Trading Specialist D.R. Barton is bullish on the UA stock price and sees it climbing this quarter…

"I think [Under Armour stock] is going up," Barton said on his regular appearance on FOX Business. "I think they're going to get a great hit as the NBA season winds down. Steph Curry, the company's bell cow, is really doing amazing things."

B Riley upgraded Under Armour to "Buy" from "Neutral" earlier this year.

Tuesday, FBR Capital raised its Under Armour pre-split price target to $118 from $115. The firm said Under Armour's domestic footwear and international growth will increase the company's visibility and drive growth.