The price of crude oil is finally back near its late-March high thanks to one bullish report last week that indicates U.S. supply is falling.

The international price of crude oil also posted gains this morning. The Brent crude oil price - which serves as the global oil benchmark - jumped 1.7% to $42.63 a barrel. After last week's 8.5% gain, futures for June delivery are up 5.7% this month.

And the recent rally comes on the heels of last week's better than expected supply report...

This Report Is Pushing the Price of Crude Oil Higher

The price of crude oil's 9.5% rally over the last week was mostly due to an unexpected decline in U.S. oil supply.

According to the most recent report from the U.S. Energy Information Administration (EIA), oil inventories fell by 4.9 million barrels during the week ended April 1. That defied analysts' expectations of 2.9 million barrels. It also marked the biggest supply decline for the last week of March in at least 19 years.

Despite the report, the big banks still remain bearish on the price of crude oil ahead of the April 17 meeting of oil producers. According to The Wall Street Journal, Morgan Stanley (NYSE: MS) predicts oil prices to head lower leading up to the meeting, while Goldman Sachs Group Inc. (NYSE: GS) thinks the recent supply drop is seasonal and won't ease the supply glut over the long term.

And it has to do with one of the largest oil field services companies in the world... 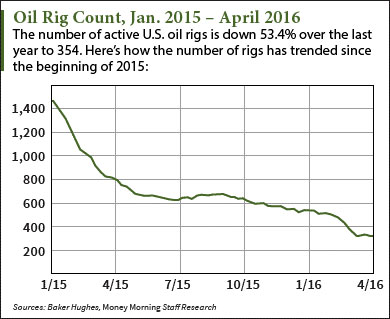 The falling U.S. rig count is the catalyst that will gradually lower supply levels this year.

Baker Hughes Inc. (NYSE: BHI) - the fifth-largest oil field services firm in the world - counts the number of active oil and natural gas rigs every week. Since January 2015, the number of active U.S. oil rigs has plunged a whopping 75.1% from 1,421 to 354 as of April 8. That's the lowest number since Nov. 6, 2009, and the third weekly decline in a row.

"The U.S. rig count has declined precipitously... that can't help but lead to a drop in supply," Moors said back in December when there were 545 U.S. oil rigs online. "It's only a matter of time now before we start to see a reduction in supply on the American side of the market."

This continuing supply drop - along with a 1.2% increase in global oil demand - will stabilize the price of crude oil in 2016. As of April 7, Moors expects WTI crude oil prices to hit between $42 and $45 by mid-June. Better yet, WTI could hit the $50s by the end of the year.

How Energy Investors Can Beat Wall Street in 15 Steps: As a normal investor with a balanced, long-term view, you can stabilize the energy market and help prevent future meltdowns. The way to do that is by following this 15-step strategy. Don't worry - it's easy to follow, and everything you need is explained right here...